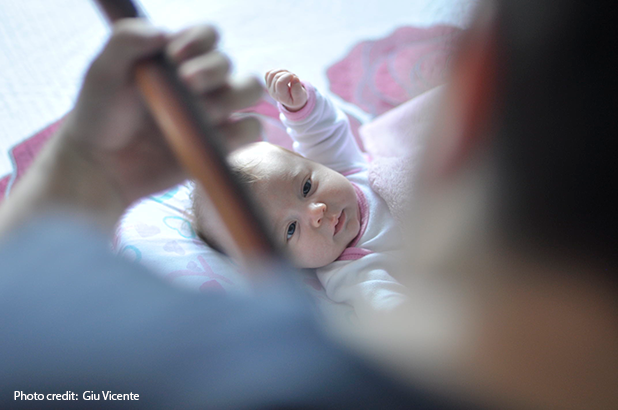 The U.S. has less than five percent of the world’s population, yet holds 25 percent of the people who are incarcerated. Our nation’s staggering rates of incarceration can be traced to the “tough on crime” politics of the 1980s and 1990s.

“Tough on crime” has been tough on kids, too. More than five million children, or about seven percent of all children in America, have had a parent who lived with them go to jail. This proportion is higher among black, poor, and rural children.

Children with incarcerated parents frequently experience trauma and hardship. They may lose their primary caregiver, be forced to change homes and schools, and lack adequate resources. Often they develop emotional and behavioral problems related to the loss of a parent. Having a parent in jail or prison as a child has been linked to poor mental and physical health in adulthood.

For years, courts and state agencies operated under the premise that children whose parents are incarcerated are better off without them. A growing body of evidence suggests the opposite is true: Children who are able to maintain their relationship with their parent while that parent is incarcerated tend to do better in school and have fewer health and behavior problems. And incarcerated parents who are allowed to maintain relationships with their children are less likely to re-offend than those who don’t have this opportunity.

Recognizing this, in 2013 the Washington Legislature passed SHB 1284, also known as the Children of Incarcerated Parents bill. The law, which the ACLU supported, requires the state to provide additional services to incarcerated parents to aid and maintain the relationship between parent and child. It also gives protections to parents by requiring courts to consider factors surrounding the parent’s incarceration before terminating the parent’s rights to their child. The law is the result of an almost decade-long effort by parental rights advocates to help preserve the parent-child relationship when a parent is incarcerated.

Currently, the Washington Supreme Court is considering cases involving the termination of parental rights under this law.  Two of the cases involve interpretation of the law’s requirement that the state provide additional services to incarcerated parents to aid in maintaining the relationship between the child and parent.  In these cases, In re Dependency of DLB and In re Welfare of KJB, the lower courts interpreted the statute narrowly as requiring additional services only if the parent was incarcerated at the time of the termination trial.

The ACLU-WA, The Defender Association, Legal Voice, the Incarcerated Parents Advocacy Clinic, and the Incarcerated Mothers Advocacy Project jointly filed briefs in both cases in support of preserving the parent-child relationship. The briefs assert that lower courts’ rulings undermined the purpose of the law, which is to help mitigate the negative impact incarceration may have on the parent-child bond. Reviewing the discussions in the legislature that accompanied its adoption, the briefs concluded it is illogical to accept the state’s narrow interpretation of the law.