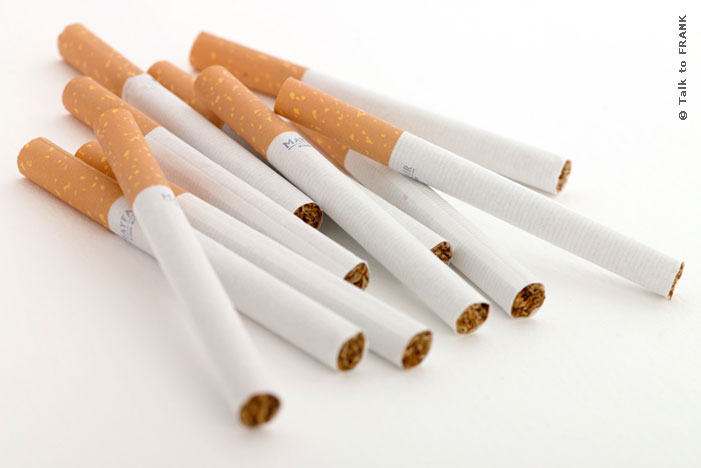 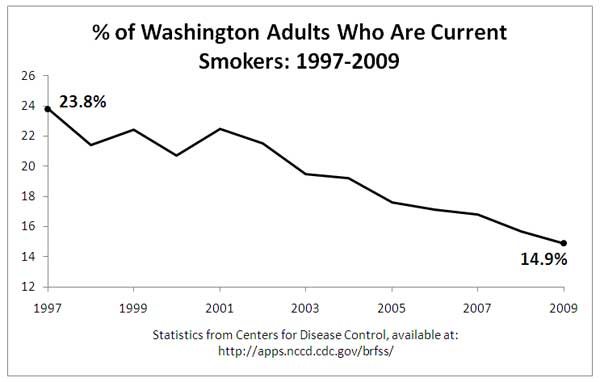 In considering alternatives to arrest and incarceration for reducing substance abuse, it is useful to note that smoking rates continue to decline in Washington state -- and to understand how that decline came about. In 1997, almost 25% of adults were current smokers. By 2009, this number has decreased to less than 15%. In fact, we now have the third-lowest smoking rate in the U.S. Well done, Washington!

So what explains this significant decrease? According to the Department of Health, it stems from “establishing one of the nation’s strongest smoke-free laws, imposing the third highest cigarette tax in the country, and implementing a comprehensive tobacco prevention and control program,” which made the difference. Let’s take a closer look at the last of these policies.

In 1998 the state received $4.5 billion in damages as part of the Tobacco Master Settlement Agreement from Washington’s (and 45 other states’) lawsuit against tobacco companies. In 1999, $100 million of the settlement was appropriated by the state legislature to create a Tobacco Prevention and Control Account, which in turn led to the creation of the Department of Health’s Tobacco Prevention and Control Program. This program has been implementing a variety of programs since 2000. These include:

-Community and tribal prevention, via health departments and community organizations;

-Policy development and enforcement against advertising tobacco towards minors and selling to minors; and

Notably absent from this list of programs is arresting, prosecuting, and incarcerating adults for smoking tobacco. Thank goodness. Treating tobacco use as the health problem it is and keeping it out of the criminal justice system is a more reasonable policy for dealing with a harmful substance than total prohibition. It also seems to be an increasingly effective policy (see graph above) and doesn’t lead to a lifetime of collateral consequences which accompany a criminal conviction.

How much does the Tobacco Prevention and Control Program cost? Since 2000, the program has received between $15 and $30 million per year, which is not that much once you factor in the taxpayer healthcare costs associated with tobacco use. Unfortunately, current Washington state budget difficulties have put funding in jeopardy. If state revenues do not improve, all state tobacco prevention and control dollars (which is the bulk of the programs money) will expire in 2011. That’s right: a proven, cost-effective, and smart policy will lose all state funding.

We should think seriously about reallocating money from the state’s punitive War on Drugs strategies to the Tobacco Prevention and Control Program. Consider, for example, that earlier this year, the Office of Financial Management (OFM) estimated that by simply reclassifying the possession of forty grams or less of marijuana from a crime with mandatory jail time to a civil infraction with a $100 fine, the state would save close to $15 million in criminal justice costs each year – the bottom end of the tobacco program’s annual budget – and take in close to $200 thousand in new revenue. Better yet, what if we stopped treating marijuana use as a crime altogether, tightly regulated it (limited advertising, strict prohibition for minors, etc.), taxed it heavily, and directed the revenue into treatment and prevention programs for all substance abuse? OFM  estimated that this type of policy could bring in $150 million per year in tax revenue.

The bottom line is that we can’t afford to lose the Tobacco Prevention and Control Program or fail to learn its lessons. Prevention, treatment, and public education work, even against the most deadly and addictive of substances available on the planet.