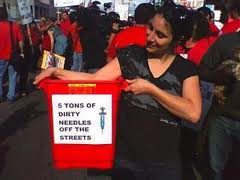 Few public health interventions have been proven as effective as syringe exchange programs, which have been in existence since the 1980’s. As a recent article in The Atlantic put it:

Syringe exchanges, are internationally credited with dramatically reducing HIV and hepatitis infections among injection drug users. They've also been proven to link addicted people to care (PDF), save taxpayers millions of dollars in health care costs, and help keep syringes off the streets, protecting both cops and kids.

Despite the evidence, the U.S. federal government refused to fund these programs for decades, for purely political reasons. This all changed in 2009 when the ban was finally lifted. Unfortunately, this policy change would be short lived.

In December 2011 the federal funding ban was reestablished when Congress adopted an amendment added by Republican lawmakers to a budget bill. As one syringe exchange proponent stated, “Reinstating the ban is murderous. It's saying that people who use drugs should contract fatal and expensive diseases and die.”

Failure to fund syringe exchange programs is inhumane and will end up costing taxpayers dollars by failing to curb preventable diseases, such as HIV and Hepatitis. As a result, advocates from the Harm Reduction Coalition are working to reinstate federal funds. They’ve organized a Day of Action to end the ban. Please visit their website to learn more (http://harmreduction.org/syringe-access/syringe-access-policy-advocacy/day-of-action-on-syringe-exchange/).