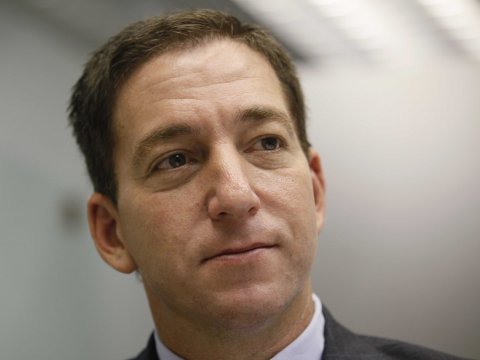 In June of 2013, NSA contractor Edward Snowden famously leaked knowledge of systematic government spying to journalist Glenn Greenwald of The Guardian. Over the next year, Greenwald assembled his insights about government spying and Snowden into a book titled No Place to Hide. On a book tour, he recently spoke to a packed house at Seattle’s Town Hall.

Greenwald was intent on setting the record straight about Edward Snowden and his motivation for leaking confidential NSA documents. First, he insisted, Snowden is neither a Russian spy nor a Chinese spy – two accusations that have appeared in American media from CNN to Fox News. Greenwald reminded the audience that China was hostile to Snowden’s requests for political asylum, forcing him to leave, and the reason Snowden stayed in Russia was because the US government invalidated his passport there while he was in transit to Cuba. Greenwald asserted there has never been a shred of evidence reflecting Snowden’s coordination with other governments, particularly not Russia or China.

The journalist also sought to dispel the myth that Snowden was a “fame-seeking narcissist.” Snowden explicitly told Greenwald that he wished to disappear from the media as soon as the revelations hit the public, so to maintain attention on the disclosures rather than himself. And in fact, after the secrets about NSA spying came to light, Snowden maintained a minimal level of interaction with the media.

Greenwald then took on a phenomenon he has observed when someone publicly dissents to American government surveillance. From Daniel Ellsberg’s leak of classified Pentagon papers to Julian Assange, Chelsea Manning, and now Edward Snowden, the media portrays the individual as mentally ill and dangerous – so that the public feels disdain for them, writing them off as rogue enigmas that are the enemy of the good.

He regards these as fabricated projections of the problem away from the government’s violations of its citizen’s privacy and onto the dissenter. It tells the American public that if you dissent, something must be wrong with you. It tells American citizens that the only healthy option is to obey the status quo and remain silent about things government actions you find problematic. This mentality, Greenwald asserts, is the true threat to democracy.

Concluding, Greenwald reminded the audience that everyone has something they’d prefer to be private, even if it is not a secret that risks national security. He urged that as individuals we build walls between our personal life and the NSA through methods such as encryption.