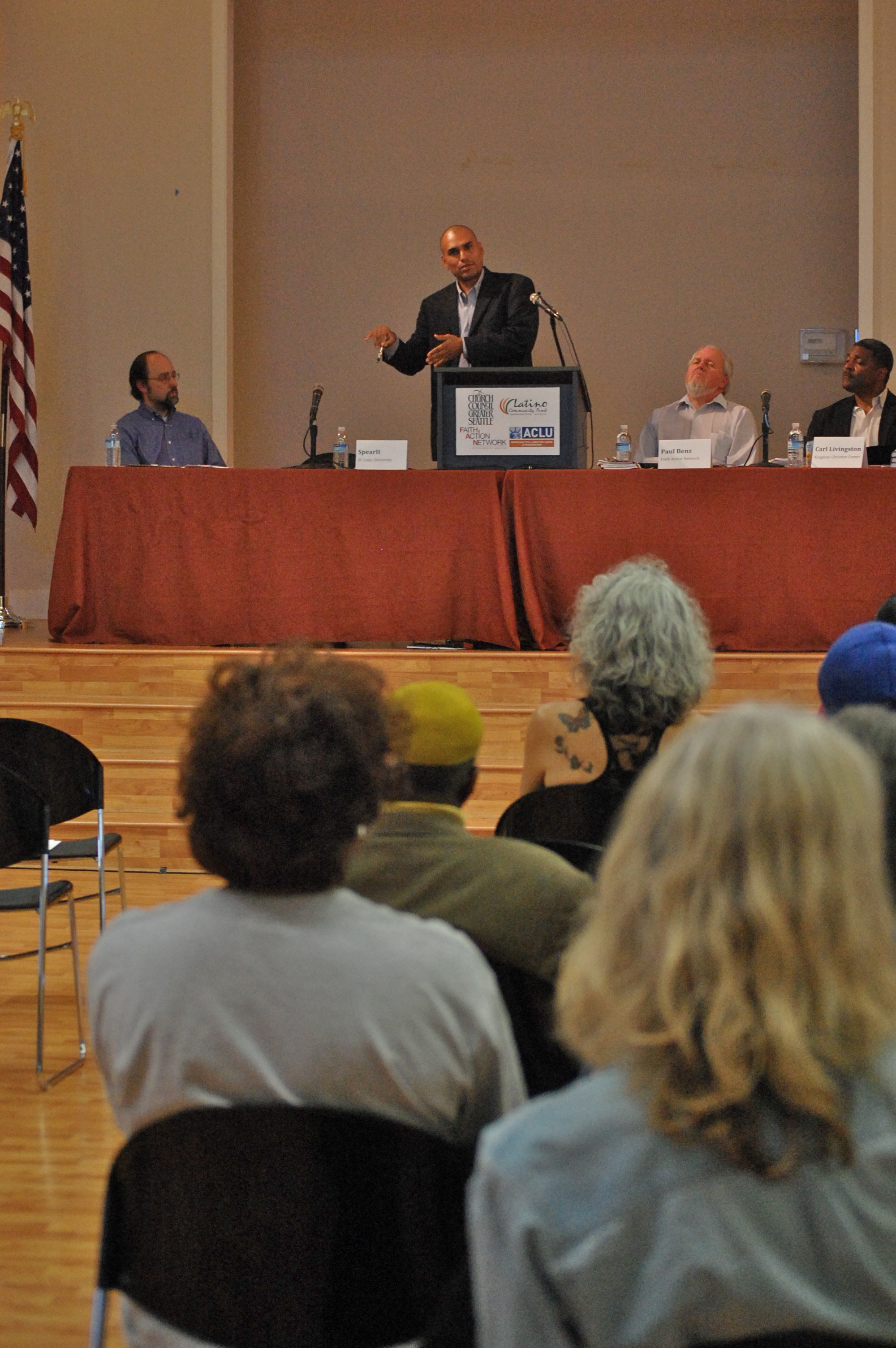 Last Tuesday evening, I attended a forum in Seattle that made some vital connections for people concerned about the enormous volume of people in our criminal justice system. Sponsored by the ACLU-WA, the Church Council of Greater Seattle, Faith Action Network, and the Latino Community Fund, its topic was "Faith Communities and Mass Incarceration."

The U. S. not only has the highest rate of imprisonment in the world (715 per 100,000 people), but more people in prison that any other country in the world (2,019,234). In fact, even though America only has 5% of the world’s population, it has 25% of world’s incarcerated population. Prison overcrowding is a continuing problem, and states are building more and more facilities to house inmates.

Also troubling is racial disparity in enforcement. More than 60% of the individuals in prison are people of color. In Washington, even though only 3.6% of the population is African-American, blacks make up 11.5% of all drug arrests.

SpearIt began the conversation by explaining the correlations between the American criminal justice system and religious ideals and practices. For example, prison comes from the Catholic tradition of isolating oneself in a penitentiary to repent for one’s sins. In fact, another name for prison is a penitentiary. Even the jury trial has roots in Christianity, as the judge and 12 jurors parallel Jesus and his Apostles.

Somewhere along the line, however, things got off track. SpearIt explained how our criminal justice system no longer is based on trials and finding the truth, but on plea bargains and incarceration. Imprisoning people in droves, SpearIt asserted, is a method of social control stemming from resentment to civil rights victories won during the 1960s. Before civil rights reforms occurred, minorities made up about 25% of the prison population.

The primary means driving incarceration was, and is, the War on Drugs. In 1970, there were less than 200,000 people in prison. In 1971, the federal government enacted the Controlled Substances Act which made possession, sale, and manufacture of all drugs a crime. The current prison population is more than ten times what it was in 1970.

Following up, Pastor Carl Livingston explained how the War on Drugs and the accompanying incarceration rate have had a disproportionate and devastating effect on communities of color. Because they are arrested and convicted at much higher rates than whites, minorities and their communities experience the consequences of drug laws much more frequently. These consequences include difficulty in finding housing and employment, obtaining financial aid for school (Livingston noted that there were more blacks in prison than in college), and being exposed to both physical and mental health risks while imprisoned. Often, when a person is incarcerated for a drug offense, the community is deprived of an otherwise productive and taxpaying member. Now the community’s taxes will be used to pay for his incarceration.

Then, Rev. Paul Benz discussed why communities of faith should oppose the death penalty. Many, if not most, religions value life above all else. Even if a person has taken someone’s life, Benz asserted, there is not sufficient justification to take another. Instead, Benz said that our approach to high-level offenders, as our approaches to all other matters, should come from a place of love.

The panel concluded by encouraging those in the faith community to take a stance against the mass imprisonment of fellow citizens. For those who are in need of help, we should be providing treatment and education, not incarceration. Community members who wanted to work for change were urged by the panelists to get involved in Safe and Just Alternatives (the state campaign to end the death penalty) and to support Initiative 502 (the ballot measure to legalize, regulate and tax marijuana for adults).

When leaders of faith speak out against mass incarceration, their voices can reach audiences that have traditionally supported increased imprisonment of drug offenders. It is particularly important to reach faith communities of color because of the harms that our reliance on prisons has wreaked on them. All three panelists agreed that our society needs a new approach to criminal justice, one that ends the addiction to incarceration.