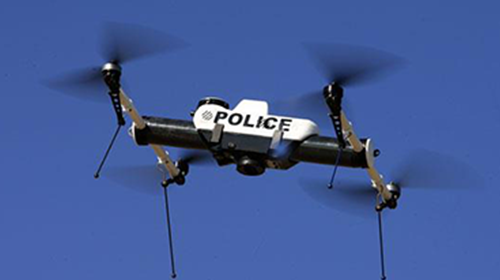 This first appeared as an op-ed in the Seattle Times.

But drones are a game-changer for airborne surveillance. As these technologies rapidly evolve and their ability to peer into every corner of society from tens of thousands of feet in the air expands, drones give governments unprecedented capabilities to engage in mass surveillance. They are relatively cheap and can be deployed in automated fleets. Drones are certain to be used under less urgent circumstances than other aircraft.

The concerns drones raise go beyond your expectations of privacy in public places. It is about your right to go about your daily business free of spying by your own government.

We no longer live in an age where a team of law enforcement personnel are needed to track your every move. Drones can be equipped with virtually any kind of surveillance technology.  Drones with high resolution cameras linked to facial recognition systems can systematically log a person’s activity, both on their own property and as they move from place to place. They can be deployed with invasive devices such as Stingrays that snoop on cell phones. They can be equipped with any other kind of sensor available to law enforcement, including infrared sensors that peer through walls or directional microphones. The sensitive information drones collect can be stored indefinitely, just waiting to be analyzed and scrutinized at any time by any person or computer algorithm with access to it.

Federal government funding is available for local law enforcement agencies to buy drones and other surveillance technology, often before agencies have decided when they will be used or have created policies regulating them. And a rapidly growing domestic drone industry is marketing drones extensively for all kinds of invasive uses.

Understandably, public concern about drones has led to a flurry of state-level legislative activity. Drone regulations have been proposed in at least 43 states and have been adopted in several.

However, Washington State currently has no regulations on how drones may be used by the government—and in particular no protections are in place to safeguard individual privacy. Similarly, our state’s courts have not directly addressed what limits there should be on drones spying on people. Without clear guidance, law enforcement may be inclined to engage in mass surveillance, while more risk-averse government agencies may forego using drones altogether until clarity emerges.

Washingtonians shouldn’t have to choose between their privacy and the benefits of technology—they can and should have both. Our legislature needs to establish a statewide floor of regulations for government use of drones—allowing government agencies to use them for legitimate purposes and guaranteeing that policies are in place before large numbers of drones fly over our state.

HB 1639, a measure regulating government drone use, ensures that that drones will be permitted for regulatory enforcement and other beneficial uses, while establishing protections to prevent unwarranted spying. The bill also requires that policy debates about drones happen before they are actually deployed, and sets reasonable, common-sense limits on their use for surveillance. It requires agencies to get approval from the stage legislature or local municipalities before acquiring drones, and to report how and for what purposes the drones are being used. A warrant must be obtained when information collected from a drone will be used to spy on a person. At its heart, the bill seeks to prevent suspicionless fishing expeditions when there is no suspicion of wrongdoing.

Under the bill, government agencies, law enforcement or otherwise, can use drones during emergencies and for missions that don’t involve spying on people. Exemptions are included for useful operations such as training exercises, firefighting, search and rescue, environmental surveys, traffic analysis, or research operations, among others. This balance permits drone use for all kinds of constructive purposes, including important environmental regulatory work, while placing important limitations on dragnet spying.

This is a bipartisan issue. HB 1639 passed the Washington Senate with strong support on both sides of the aisle. Having guidelines is good for the aerospace industry and residents alike. The House of Representatives and Governor Inslee should approve this legislation to provide bright lines for drone use, rather than leaving drones to invade our skies without clear protections in place.

Jared Friend is Technology and Liberty Director for the ACLU of Washington.