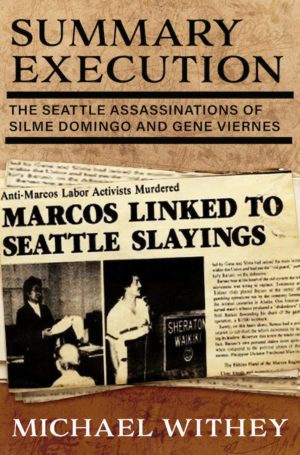 Please join us for a celebration of the lives and work of Silme Domingo and Gene Viernes and the publication of Summary Execution: The Seattle Assassinations of Silme Domingo and Gene Viernes by Michael Withey.
On June 1, 1981, Gene and Silme, two young Filipino activists were murdered in Seattle in what was made to appear a gang slaying. The victims’ families and friends suspected they were considered a threat to Philippine dictator Ferdinand Marcos and his regime’s relationship to the United States and formed the Committee for Justice for Domingo and Viernes to investigate.
Seattle human rights attorney and close friend to the slain men, Michael Withey, dropped out of law practice to pursue the case with the committee. His book describes their ten-year struggle for justice and subsequent legal victory against the Marcos regime - the first time a foreign head of state has been held liable for a murder of U.S. citizens on U.S. soil.
Featuring a panel on the Filipino, human rights and labor movements that Gene and Silme helped build:
* Terri Mast (MC)
* Cindy Domingo (Committee for Justice for Domingo and Viernes)
* State Rep. Sharon Tomiko Santos (CJDV)
* Jeff Robinson (ACLU)
* Lynne Dodson (WSLC)
* Rep. Pramila Jayapal (by video)
* Nikkita Oliver (Peoples Party)
* Author Michael Withey
* Performance by the Seattle Labor Chorus
Presentations by Gov. Jay Inslee (subject to availability).
Visit the website at michaelwithey.com to buy a book. We hope to see you at the commemoration and launch party!