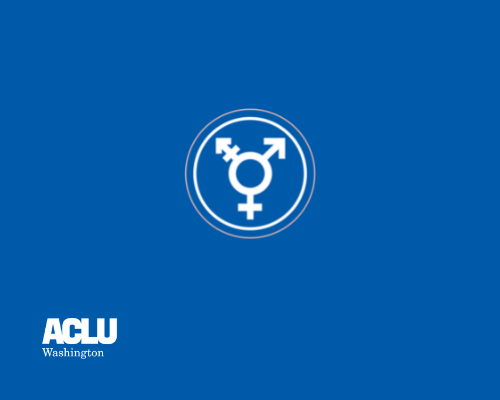 This guide is designed to help transgender individuals understand their legal rights in Washington State.

It is not meant to provide legal advice.

The law in this area changes frequently. This guide is current as of June 2022.

Are there laws that prohibit discrimination against transgender people?


Yes. State and federal laws prohibit discrimination against transgender people in many circumstances.


How does Washington law prohibit discrimination against transgender people?


Our state anti-discrimination law, known as the Washington Law Against Discrimination (WLAD), explicitly prohibits discrimination  because of “gender expression or identity,” [1]  including actual or perceived identity.
This protection  includes, but is not limited to, protection from discrimination in the following areas:

Some cities (Burien,[9] Olympia,[10] Seattle,[11] and Tacoma[12]) and one County (King[13]) have also passed local laws prohibiting discrimination based on gender identity and expression.


What does “gender expression or identity” mean under the law in Washington?

As defined under WLAD, “gender expression or identity” means “having or being perceived as having a gender identity, self-image, appearance, behavior, or expression, whether or not that gender identity, self-image, appearance, behavior, or expression is different from that traditionally associated with the sex assigned to that person at birth.”[14]  Under this definition, transgender individuals are protected by WLAD from discrimination based on their transgender status.[15]

How does federal law prohibit discrimination against transgender people?


Charged with enforcing the WLAD, the Washington State Human Rights Commission (HRC) works to prevent and eliminate discrimination by investigating civil rights complaints and providing education and training opportunities throughout Washington. For information on how to file a formal complaint with the HRC, call 1-800-233-3247 or visit www.hum.wa.gov

Two federal laws (Title VII and Title IX) have been interpreted by the courts and federal agencies to protect against discrimination based on gender identity in some settings.

Employment:  Title VII prohibits discrimination based on sex in employment. In 2020, the U.S. Supreme Court ruled that Title VII prohibits discrimination based on gender identity and sexual orientation.[16] In response, the Biden Administration issued an executive order in January 2021 directing federal agencies to adapt their policies, regulations, existing orders, and programs to the court’s decision.[17]

Housing: In February 2021, the U.S. Department of Housing and Urban Development (HUD) interpreted the Fair Housing Act to prohibit discrimination based on sexual orientation and gender identity.[19]

Although these federal agencies have implemented the executive order to protect transgender individuals, lawsuits have already been filed challenging protections for transgender people under Title IX.  This area of law should be monitored for any additional developments.

Hate crimes:  The Matthew Shepard and James Byrd, Jr. Hate Crimes Prevention Act allows the federal government to assist state and local authorities in the investigation and prosecution of hate crimes motivated by bias against a person’s gender identity or expression.[22]


Does the U.S. Constitution protect transgender people from discrimination?

In addition, the First Amendment, which bars the government from censoring speech or expression, protects people’s right to dress (an important form of personal expression) in a way that is consistent with their gender identity. Furthermore, the Due Process Clause likely recognizes and protects individuals’ interests in determining and expressing their gender through personal appearance and mannerisms.


Does the law protect a transgender person’s right to use the restroom consistent with their gender identity?


Yes. WLAD specifically protects against discrimination in employment and places of public accommodation, including
public schools, based on one’s gender expression or identity.[25]  The Washington State Human Rights Commission (HRC) — the state agency responsible for enforcing the WLAD — issued regulations in 2015 clarifying that the WLAD protects the right of transgender individuals to use restrooms and other gender-segregated facilities consistent with their gender identity[26].

The Washington state Office of Superintendent of Public Instruction (OSPI) also issued guidelines to school districts recognizing the rights of transgender students to use restrooms consistent with gender identity. These guidelines, which relate to the elimination of discrimination in public schools, state that school districts should allow students to use the restrooms “consistent with their gender identity consistently asserted at school.”[27] The guidelines also state that any student who has a need or desire for increased privacy should be provided access to an alternative restroom, such as a staff or health office restroom, but that no student should be required to use a private restroom or a restroom inconsistent consistent with their gender identity just because they are transgender or gender nonconforming.[28]

Federal agencies have previously determined that federal civil rights law protects a transgender person’s right to use restrooms and other gender-segregated facilities consistent with their gender identity in education programs that receive federal financial assistance (i.e., public schools and some private schools).[29] The federal courts have also recognized the right to use restrooms consistent with gender identity in federally funded education programs.[30]


Are there laws that specifically protect transgender students from harassment?

If you are being harassed, intimidated, or bullied in school, keep a record of each incident and report them to your principal or counselor. To talk to someone outside of your school or to get more information on strategies to stop harassment, call the Safe Schools Coalition at 1-877-723-3723 or visit www.safeschoolscoalition.org

It is the ACLU’s position that discrimination or harassment directed at transgender students in public schools may violate the Equal Protection Clause of the federal Constitution, which would require schools to  protect transgender students from harassment on an equal basis with all other students; the First Amendment, which we believe protects the right of students to dress in accordance with their gender expression or identity; and the  Due Process Clause, which we believe protects students’ liberty interest in their personal appearance.

The American Civil Liberties Union of Washington is a nonprofit, nonpartisan membership organization devoted to protecting the civil liberties of all people in Washington and extending rights to groups that historically have been denied equal treatment.

The ACLU of Washington offers information in response to specific inquiries or concerns, suggestions on how to assert individual rights and engage in advocacy; provides referrals to other organizations better able to offer such information or advice in specific situations; and in some instances, undertakes impact litigation (i.e., pursues lawsuits that will defend or extend fundamental civil liberties and civil rights that will affect a large number of people).

If you feel you have been the victim of discrimination based on your gender expression or identity, please consider contacting the ACLU of Washington in one of the following ways: