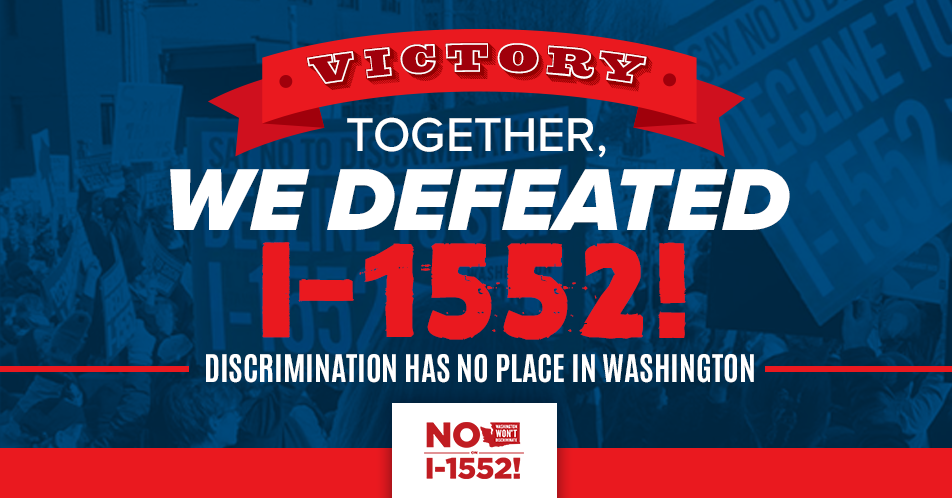 A statement by Washington Won't Discriminate, the campaign to defeat I-1552.

For the second year in a row, anti-transgender forces have failed in their attempt to qualify a ballot initiative aimed at rolling back non-discrimination protections for our transgender friends and neighbors in Washington.

The Washington Secretary of State’s office announced this morning that the I-1552 campaign cancelled its 3PM Friday appointment to turn in 259,622 valid signatures. That means today is the end of the road for I-1552, which, if passed, would have overridden state and local protections against gender-identity discrimination in certain public places, required that public schools restrict access to some facilities based on sex at birth, and allowed related lawsuits against schools.

“We all care about safety and privacy, but people understand that repealing protections from discrimination for transgender people won’t make anyone safer,” said Seth Kirby, a transgender man and Chair of Washington Won’t Discriminate, the No on I-1552 campaign. “It’s already a felony to assault or harass someone in public facilities, and no one should have to prove their gender to self-appointed bathroom cops.”

I-1552’s failure to qualify for the ballot is a huge victory for all Washingtonians, especially transgender Washingtonians and the 500-strong coalition of businesses, labor unions, faith organizations, and others who ran a vibrant “Decline to Sign” campaign that collected more than 50,000 pledges against I-1552 from Washington voters.
Opposition to this initiative was as bipartisan as it was broad. Earlier this week, former Washington State Republican Chair Chris Vance urged voters to not sign I-1552, saying “We need laws that protect the rights, safety, privacy, and dignity of all citizens, including transgender people.”

That’s because this so-called privacy initiative—which first reared its head last year as a similar initiative, I-1515—is merely an underhanded way of encouraging discrimination against transgender people. Today, it’s clear that our fellow Washingtonians saw right through this ruse.

Washingtonians value freedom and liberty, and will reject any attempt to send our state, which stands as a bastion of these values, sliding backward at a time when they are under threat around the country. Discrimination has no place in Washington, a fact that voters have demonstrated unequivocally two years in a row.

“It’s time for the forces behind I-1552 to get the message—Washingtonians aren’t buying what they’re selling because in this state we value freedom and liberty, and we don’t want to go backwards from the progress we’ve made for LGBTQ people,” said State Representative and Judiciary Committee Chair Laurie Jinkins. Jinkins has been a strong voice against I-1552, and instrumental in protecting the rights of LGBTQ people during her time in office.

We know Washingtonians also care about safety and privacy, but voters clearly understand that repealing nondiscrimination protections from transgender people won’t make anyone safer. Law enforcement and sexual assault prevention groups—including the Coalition Ending Gender-Based Violence, the YWCA and the King and Snohomish County sheriffs—agree on this, which is why they opposed I-1552 as unnecessary, unenforceable and harmful.

“I’ve devoted my career to preventing sexual violence in our community and there is nothing more important to me than ensuring our community is safe,” said Andrea Piper-Wentland, Director of the Washington Coalition of Sexual Assault Programs. She makes it clear that I-1552 would have done nothing to keep any community safe—and might make them more dangerous.

“I’m proud that voters declined to sign on I-1552, an initiative which would have done nothing to make us safer and instead would have caused serious unintended consequences for the privacy and safety of all of us by encouraging more discrimination and harassment.”

That’s because contrary to its stated purpose, I-1552 would have increased bathroom confrontations. It would be difficult to enforce without subjecting everyone to inspection from self-appointed bathroom cops—ordinary or even dangerous people demanding to see body parts before allowing access to facilities.

Washington Won’t Discriminate also raised nearly $300,000 from thousands of people, groups and businesses including ACLU of Washington, Microsoft, Pride Foundation, Legal Voice and Freedom for All Americans and Human Rights Campaign had already recruited more than 100,000 activists and volunteers ready to oppose I-1552 if it had made it to the ballot.

And although it did not, we will continue to mobilize public support for protecting our state’s nondiscrimination laws from future attacks, including future ballot initiatives.