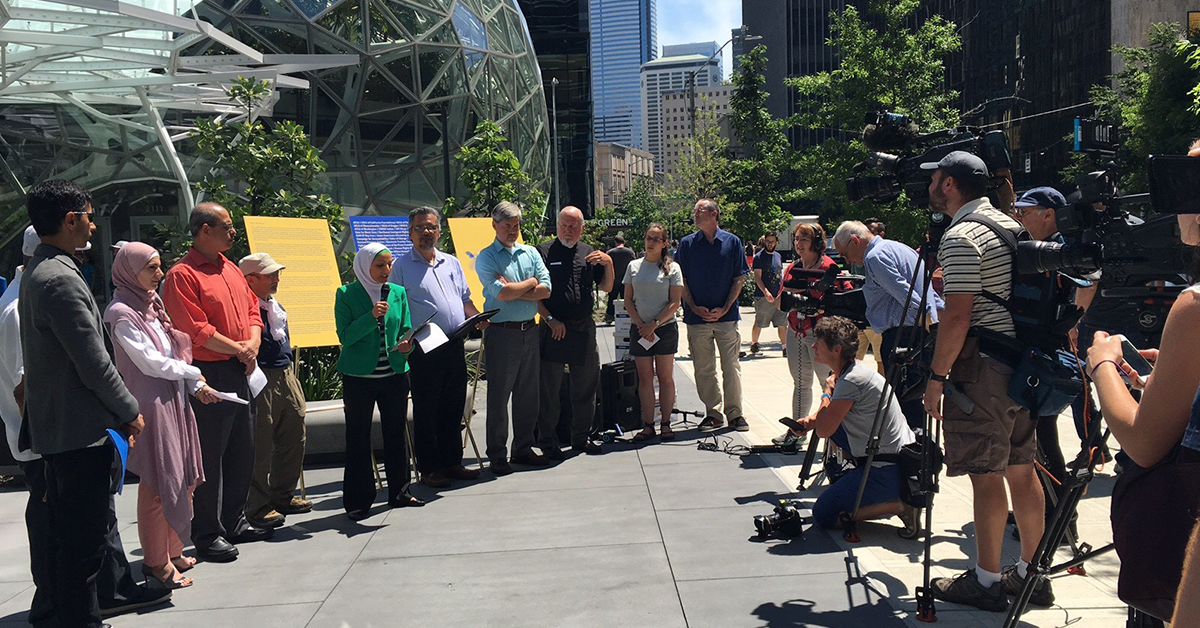 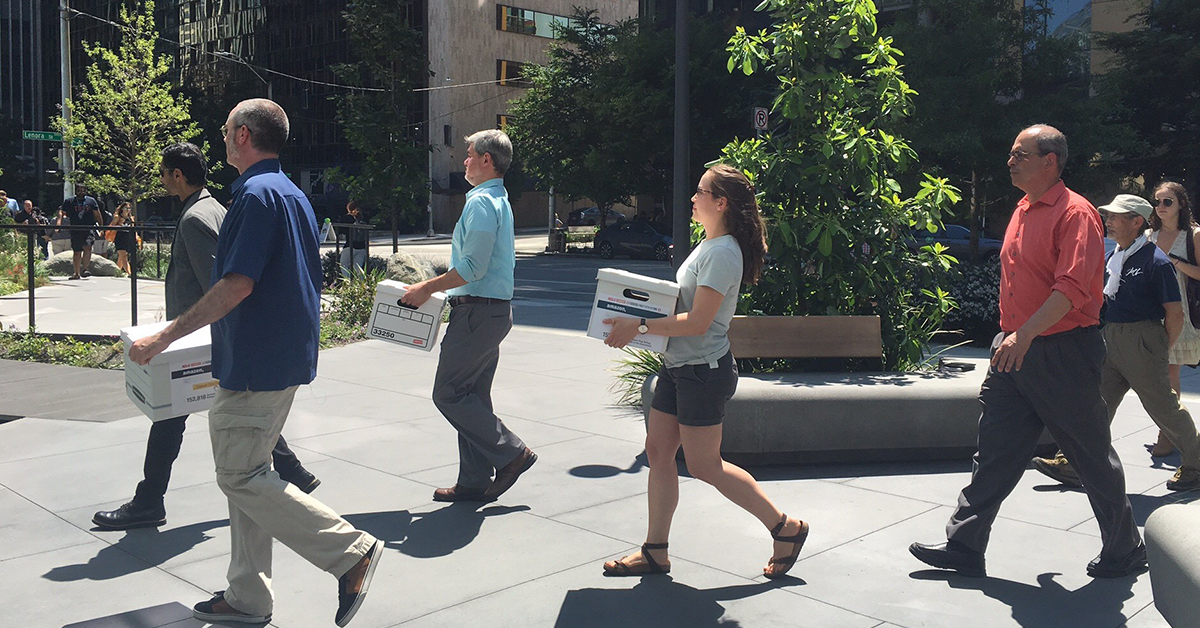 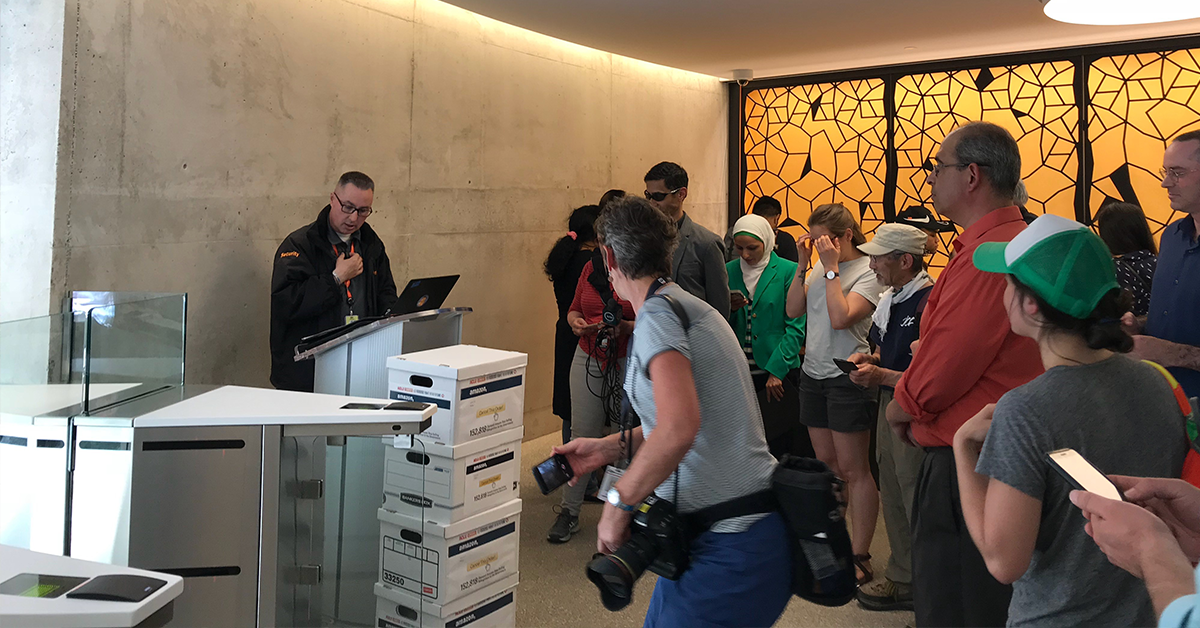 Updated June 18, 2018 3 p.m:  Today, we delivered a coalition letter from nearly 70 organizations and a petition with over 150,000 signatures to Amazon asking them to stop selling face surveillance systems to the government.

Increasingly, the government is adopting powerful surveillance and artificial intelligence technologies to record and analyze our daily lives in innumerable invisible ways. Cameras in public places record where we go, what we do, who we associate with, and what we say. In the hands of the government, this creates a treasure trove of data that can be used over and over again as new technologies allow for faster, cheaper, and deeper analysis.

These systems can have high-stakes impacts, influencing decisions on who is released from jail, who is surveilled by government officials, and which communities receive more intense scrutiny from law enforcement. Such technologies are often created by large companies without community accountability and public disclosure around how they function. It’s increasingly evident that this must change if we want to protect our civil liberties.

The latest example of this trend is Amazon’s face surveillance product, Rekognition, which can quickly and inexpensively identify people from photos and live video streams. This technology, which Amazon is actively marketing to law enforcement, will supercharge government surveillance if widely adopted. This affects everyone, but will have an outsized impact on Black, Latino, Muslim, and immigrant communities who have already borne the brunt of past surveillance by the government.

Amazon has an opportunity to be a good corporate citizen by listening to the voices of vulnerable communities that will be impacted by this technology and stopping sales of Rekognition to the government.

Rekognition makes mass surveillance a reality by taking images of people and searching them against tens of millions of database records – in real time.  Amazon is marketing the technology aggressively, offering government entities the expertise of its product team and asking for feedback from law enforcement.  Although competitors have offered facial recognition systems in the past, Rekognition runs on Amazon’s cloud platform, which is already used by many government agencies.  This makes widespread facial recognition easy and cheap to adopt.

Rekognition changes the game by allowing the government to perform much broader and more focused surveillance than was previously possible.  It can be used for identifying faces in real time, so that government users can immediately identify and locate people across an entire city – from activists at a protest to worshippers heading to a church service. It can be used for analysis of sentiment, whereby the government identifies whom it deems likely to be violent. It also can be integrated with police body-worn cameras, scanning the public whenever and wherever police officers are deployed.  It’s important to keep in mind that facial recognition that can applied to any existing database of photographs or video.  With more and more data being created daily in the digital world in which we now live, this means that government deployment of Rekognition would expose an ever-expanding, massive trove of images to automated searching by law enforcement.


Facial recognition is biased. It misidentifies African Americans and women, and relies on databases built on a history of discrimination and disproportionality in our criminal justice system.  Surveillance technologies like this have long been used against communities of color that already suffer from over-policing—see, for example, the use of automated license plate readers (ALPRs) in New York City to track worshippers at mosques, based on an unfounded believe that Muslims are more likely to be violent—and there is every reason to believe that these communities will bear the brunt of new surveillance technologies.

Further, government use of facial recognition comes without transparency. As with other powerful surveillance tools used by law enforcement – such as ALPR systems and StingRay cell tower simulators – invasive facial recognition systems have been adopted by governments without public debate or opportunity for input from the communities that they will most impact. The public has no idea of the scope of the use of Rekognition because neither Amazon nor the government has provided that information.

Amazon appears to be treating this as just another project, responding to law enforcement’s requests to make the technology more effective and thus even more invasive without questioning its impact.  But Rekognition can fundamentally change the relationship between community members and the government. It can be used to track protesters, target immigrants, and spy on entire neighborhoods. Its deployment by government is especially concerning at a time when public protest has spiked and the federal government is attacking immigrants and treating political activists as criminals. In this political climate, technology like Rekognition powers surveillance that undermines civil rights and civil liberties, including those of Amazon’s own customers.

Amazon claims that Rekognition is just an algorithm and that the company has no responsibility over how it is deployed.  The company places no meaningful restrictions on the use of its product, saying it cannot be used “illegally” or to violate constitutional rights.   But those terms do little to protect the public—in part because courts will never see cases from people harmed by a technology that cannot be detected.  In practice, Amazon’s stance means law enforcement can secretly use Rekognition without suspicion of criminal activity or a warrant.

That’s why the national ACLU, five state affiliates (including the ACLU of Washington), and numerous partner organizations representing  faith, labor, immigrant rights, civil rights, communities of color, and other communities have called upon Amazon to not make Rekognition available to government agencies.  “People should be free to walk down the street without being watched by the government. Facial recognition in American communities threatens this freedom,” the groups said in a letter to Amazon CEO Jeff Bezos. More than 65 organizations from around the country have signed onto the letter.

Backing this letter with grassroots muscle is a recently launched nationwide petition urging Amazon to keep its facial recognition technology out of the hands of government. It has garnered more than 50,000 signatures, with an additional 100,000 signatures on similar petitions from partner organizations.  In addition, a letter signed by a number of investor groups highlights business concerns over Amazon pursing this problematic technology.

Companies like Amazon have great power over our lives due to the data and technology they control. It’s time for them to recognize the responsibility that comes with that power.  Amazon touts itself as customer-focused company.  It can protect its customers by not selling to government entities a powerful tool primed for abuse.

The deployment of technology is not a neutral act—use of facial recognition gives the government greater powers than ever before to surveil members of the public without suspicion of wrongdoing and to invade personal privacy. Amazon should exercise corporate responsibility by not providing government with the infrastructure to build a surveillance society.
Explore More:
Privacy
Surveillance
Technology