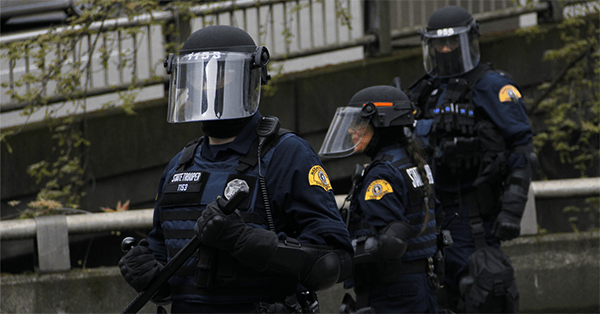 “I said, please don’t be too nice. Like when you guys put somebody in the car and you’re protecting their head, you know, the way you put their hand over? …I said, you can take the hand away, okay?” These are the words of our president speaking to law enforcement this summer, a few short weeks after the acquittal of Philando Castile’s murderer in Minnesota and the shooting death of Charleena Lyles here in Seattle.

Attorney General Jeff Sessions has asked the Department of Justice (DOJ) to ensure its reform agreements – agreements made under the Obama administration to help reform police departments with proven records of excessive force and racially biased policing – didn’t interfere with the presidential agenda to “improve officer morale and safety.”  Are the president and attorney general saying that officer “morale and safety” depend upon using excessive force and racially biased policing? It is hard to fathom.

At the ACLU-WA our police reform and accountability work involves issues that are complex, interconnected and deeply ingrained. It can take years to implement policy change, let alone confront cultural issues of bias and inequity. But we have seen some important progress recently in Washington.  Here are two examples:

Pasco: On February 10, 2015, Antonio Zambrano-Montes, armed only with rocks, was shot and killed by Pasco police officers. The ACLU-WA joined with community members to express solidarity with the family and the community and to press for change.  We issued a report pointing to what I’ve come to see as the trinity of problematic policing issues: excessive use of force, racially biased policing and mental health/crisis intervention failures. With this pressure, the Pasco Police Department (PPD) itself reached out to the DOJ for evaluation, resulting in recommendations which mirrored the ACLU report calling for change.

Since then, the PPD has made significant revisions not only to their written use of force procedure but also to the training provided to its officers.  It has engaged in an intensive effort to diversify the police force.  It has adopted new programming and partnerships to better respond to mental health crises.  Although there remains work to be done, community members are excited and empowered by the changes and eager to continue to work with the PPD.  The ACLU is eager to help other communities do the same.

Seattle: In 2010 after a string of incidents in which the Seattle Police Department (SPD) engaged in unnecessarily violent confrontations with citizens, all of whom were people of color, the ACLU-WA led 34 other civil rights and community organizations in asking the DOJ to investigate. The DOJ confirmed that the SPD engaged in a pattern and practice of excessive force.  Since that time the SPD has been operating under a consent decree with the DOJ, with a court-appointed monitor.

While there have been many highs and lows in this process, in its April 2017 report, the monitor noted that “Overall, use of force has gone down even as officer injuries have not gone up and crime, by most measures, has not increased.”  We are also heartened that the Seattle Community Police Commission, created under the consent decree, is now a permanent and genuine mechanism for community voice in matters of police accountability and community trust. These are very positive developments.

Then this June we were rocked by the police killing of Charleena Lyles, a pregnant mother of four who had called the police for help and was shot dead in the presence of her children.  The police had previous experience with Ms. Lyles and the officers were aware of recent mental health concerns before entering into her home.  That same triad of key issues – excessive force, mental health crisis intervention, and racially biased policing – all converged in this one tragic incident, leaving many in the community wondering – has the Seattle Police Department really changed?  What will it take to prevent black lives being taken?

Jerry Large of the Seattle Times opined about Ms. Lyles, “She was the 451st person killed by police in this country in those 169 days. This is one of the ways in which America is an exceptional nation. We resort to violence much more often than any other economically advanced democracy. This is the path our country has chosen. It doesn’t have to be this way.”

The U.S. has a complicated and blemished history with people of color. Whether we start with the attempted genocide of Native Americans, speak to the forced slavery (and subsequent Jim Crow policies) impacting African Americans, the racially focused immigration policies such as the Chinese Exclusion Act or modern-day demonization of Latinos and Muslims, or even the forced incarceration of Japanese and Japanese Americans during World War II – racism is structurally ingrained in our country’s very existence.

The scholar john a powell defines the concept of structural racialization as when systems and processes produce and reproduce unequal outcomes along racial lines with or without intent.  Our country’s history with people of color has continually placed people of color as “other” and thus worthy of different treatment.

We must face the evidence of structural racism and implicit bias in our policing. Historical depictions and understandings of black people in particular as stronger, lawless, more dangerous and likely to be violent are deeply ingrained into our psyches -- these are the lessons of implicit bias. Implicit bias refers to attitudes or stereotypes that affect our understanding, actions, and decisions in an unconscious manner.  And these biases impact the work of our police, regardless of any conscious desire to be fair, or assertion of the absence of racist intent.

Consider that Philando Castile had been pulled over at least 31 times and hit with 63 traffic charges by police before the final, fatal encounter.  He had no criminal record beyond the traffic violations.  His was not an unusual case. There is ample evidence that blacks and Latinos are disproportionally pulled over by police and many of these incidents lead to injury regardless of how the “suspect” behaved. Confronting the role of structural racism in policing (and elsewhere) must be at the core of our work to save lives and ensure police are there to serve and protect.

What’s next?  We will continue to pursue specific policy changes, training, and community oversight for police departments around the state. We want to see intensive training that promotes de-escalation and decreases use of force.  We will work for genuine accountability via state legislation that clarifies when an officer can and should be prosecuted.  We want to see a deeper understanding and acknowledgement of biases, both implicit and explicit, along with solutions to mitigate the consequences of bias.  Finally, when police encounter someone experiencing mental health crises, they need to have had improved crisis intervention training and techniques to prevent those incidents from turning deadly.

Modern policing is complicated.  Police are dealing with a wide range of complex social situations and are often making split-second decisions in dangerous situations.  We also know that law enforcement officers are human and most of them came to policing out of a desire to do good in their communities.  We must shift policing culture to a primary focus on sanctity of life, with this principle so firmly engrained that all policies and training lead away from force unless there is truly no other choice.   We must work for improved police and community relationships and trust, including formal community oversight.

Given our country’s current leadership and a movement toward empowering police violence, these goals may feel harder to achieve than ever.  But when I think about how far the Pasco Police Department has come in just two years, and how dedicated they are to a model of policing that benefits the community and preserves life, then I know these reforms are possible.  We will continue to partner with law enforcement agencies and community groups who envision a safer and more harmonious world.
Explore More:
Policing
Racial Justice