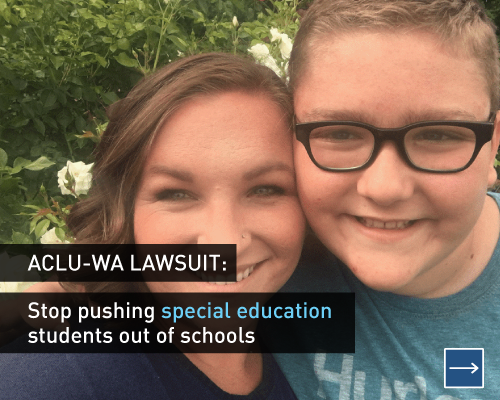 ACLU Calls on University of Washington to Curb Campus Surveillance

All Things Being Equal: Are They?

Published:
Friday, June 4, 2010
In passing the Healthy Youth Act in 2007, Washington’s legislature affirmed that our youth need comprehensive and accurate sex education. It is now up to all of us to make sure that the spirit of the law is honored in our communities; by doing this, we can take a large step toward protecting the reproductive health of our youth. Read more
Read more

Published:
Friday, May 14, 2010
This session the Washington Legislature passed a landmark civil rights law (HB 3026). The measure explicitly prohibits discrimination based on race, sexual orientation including gender expression or identity, religion, disability, national origin, veteran or military status, and disability in public schools – sex discrimination was previously banned. And it gives the Office of the Superintendent of Public Instruction (OSPI) the tools to enforce compliance with these prohibitions against discrimination. This is an important step forward. But it's not time to breathe a sigh of relief yet. There is more work to ensure this law does what it is supposed to do. OSPI is hosting town halls across the state to get community members’ input to inform the creation of the Washington State Code (WAC) that will implement the new law.
Read more

News Release, Published:
Monday, April 26, 2010
After the ACLU intervened, a female student received credit for a physical education class from which school officials wrongfully barred her due to her pregnancy.
Read more

Elizabeth Wise Testimony to the Cle Elum School Board

News Release, Published:
Thursday, December 10, 2009
I am well aware that the intent in drafting this policy, the goal, is to help students by identifying drug users and then assisting them into treatment and by deterring drug and alcohol use. These are good goals. But the reading I have been doing suggests the policy may in fact result in the opposite outcome -increased problem drug or alcohol use.
Read more

News Release, Published:
Friday, November 20, 2009
In the wake of the tragic murder of gay student Matthew Shepard in Wyoming, civil rights advocates in Washington are calling for passage of the Safe Schools Act.
Read more