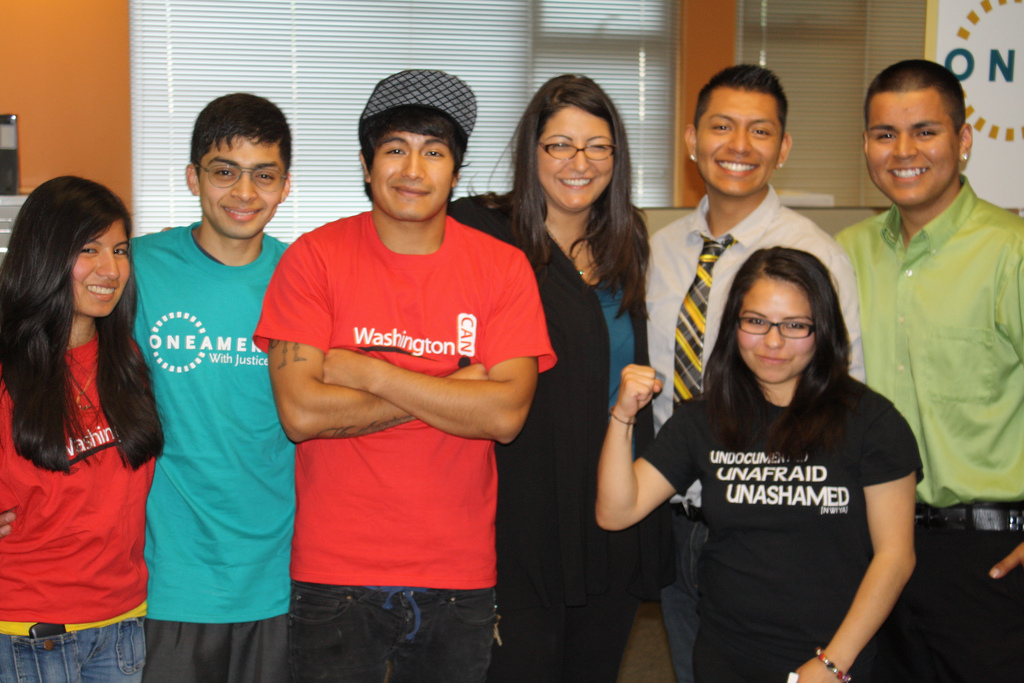 (Photo:  "'Dreamers' at a Seattle press conference on Obama’s announcement," by One America)

The due process and equal protection clauses embodied in our Constitution and Bill of Rights apply to every "person," and are not limited to U.S. citizens.

But for the youth who are impacted by today’s announcement, their immigration status means that those basic principles of due process and equal protection are increasingly in jeopardy as applied to them.

Because they are unlawfully present under our current broken immigration system, they have lived with the constant nightmare that they will be deported from the only home they have ever known, often without a full and fair day in court, for a violation they had no control over because they came here as young children.  That is fundamentally unfair.

But for more than a decade, the Department of Homeland Security has deported DREAMers around the country and Congress has failed to pass the DREAM Act, despite calls by business executives, military commanders, college presidents, mayors and faith leaders to pass the measure as necessary to safeguard and build America's economic future.

While we applaud the Obama administration’s announcement today as a positive first step.  But it does not provide a permanent solution to the problem.  The administration cannot provide these youth with a path to U.S. citizenship, so we continue to call upon all members of Congress to pass the DREAM Act, which would provide a path to citizenship for immigrants who came to the United States as children and graduated from high school.

We also call for further reform of the immigration system as a whole, including curbing the unlawful activities of agencies such as the Customs and Border Protection agency, which have resulted in the racial profiling of immigrants and people of color in our state.

The ACLU-WA and the Northwest Immigrant Rights Project have filed a lawsuit to end the Border Patrol’s practice of stopping and interrogating people in vehicles on the Olympic Peninsula based on their ethnicity.

Finally, I’d like to note that today's announcement comes on the 30th anniversary of the U.S. Supreme Court decision, Plyer v. Doe, in which the high court made clear that all children, regardless of their immigration status, must be welcomed in the nation's public K-12 schools.

Today’s announcement is a step towards upholding the same constitutional ideals that compelled that landmark decision.  But let’s not let it be the last.