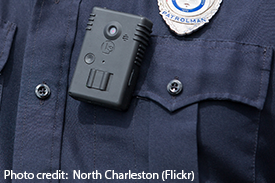 When people hear that their police department is considering equipping officers with body cameras, their initial reaction is likely to be “Good!”  Many instances of police misconduct have come to light over the years because someone recorded the incident with a mobile camera. So having a camera attached to each officer seems like a great way to ensure accountability.

The ACLU, too, supports the use of these devices as tools for accountability.  But there is a risk that the cameras could become another surveillance tool, capturing and storing private, innocent behavior.  And we are concerned that police agencies are purchasing and beginning to use these cameras without clear limitations on their use and without a full public discussion about the risks of equipping police with new surveillance capabilities.

Officer-worn recording devices will collect an enormous amount of data, but only a sliver of that information will be useful for accountability or oversight.  The cameras produce large volumes of recordings that could be used for suspicionless surveillance.  For example, footage captured while an officer is monitoring a peaceful political protest may be kept indefinitely and examined in the future – even though the officer had no suspicion of criminal behavior when the video was recorded.  Often there are unclear rules about what should be saved and minimal restrictions on how the collected data may be used or disclosed.

Further, the cameras record numerous sensitive and personal encounters between officers and members of the public. For example, an officer who responds to a call about domestic violence will likely capture footage of a victim in a vulnerable state inside their home.  And such video records will be available to anyone under our state’s public disclosure law.

These considerations matter because accountability is far from the only reason police agencies are interested in body-worn recording devices.  At law enforcement conferences, in advertising materials, and during internal agency discussions, interest in cop cameras tends to be much less focused on police accountability. For example, an early promotional video for the Taser Axon Flex body camera included testimonials from officers about how the cameras could be used: one talked about how video of an encounter could be used in court to impeach a witness, while another discussed how it could be used to help draft incident reports if the officer didn’t recall something. The Axon Flex is even packaged with another Taser product that provides digital evidence storage services.

So, what should happen to all of the data that does not serve an accountability purpose? How can we ensure that these cameras will not just become another tool for government surveillance?

Law enforcement should not be amassing information and keeping long-lasting records of innocent conduct by law-abiding individuals. To prevent “fishing expeditions,” we need comprehensive rules that regulate how the cameras may be used. Law enforcement agencies must adopt policies that require prompt deletion of any recording not flagged for an oversight use.

Without restrictions, every cop on the street could become, in effect, a government surveillance camera.