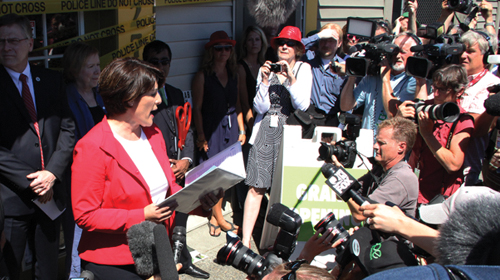 ACLU-WA Criminal Justice Director Alison Holcomb spoke at the historic opening of the first legally-licensed marijuana retail store in Seattle along with with business owner James Lathrop and Seattle City Attorney Pete Holmes.  Her comments acknowledge both the failures of prohibition and the efforts of so many to replace it with a system that works.

Today is an amazing day.  As we celebrate this historic moment, I want to share a few thoughts to put these events in a broader perspective.

In May 2009, Gil Kerlikowske, then the newly-appointed director of the White House’s Office of National Drug Control Policy (ONDCP), told the Wall Street Journal that the ONDCP had moved from viewing our nation’s drug problem as a criminal justice issue to viewing it as a public health matter. I was one of the local advocates who celebrated the apparent harbinger of a fundamental shift in the administration’s approach to drugs, announced by none other than a former police chief of the city of Seattle, home of Hempfest and Initiative 75.  Unfortunately, contrary to expectation and hope, drug offenses have continued to represent the largest category of arrests in the United States each year.  Roughly 50% have been for marijuana, and they have been disproportionately of black and brown people.

Moreover, the impact of the failed U.S. War on Drugs continues to be felt abroad.  In 2012, the Mexican Competitiveness Institute found that legal sources of marijuana in the United States could cut drug cartel profits by as much as 30 percent. Reducing the flow of money to hyper-violent criminal organizations by any amount matters.  Since 2006, more than 60,000 have died in drug war-related violence in Mexico, and an additional 26,000 are missing. Here in Washington, since 2007, marijuana prohibition has resulted in homicides in Everett, Spokane, Puyallup, Orting, Federal Way, and Seattle.

Initiative 502, as our City Attorney pointed out early in the campaign, is a game changer.  Decriminalization – ending the arrests of users – is something that’s already been done in several other states and countries.  What we’re tackling today is the supply side of the equation.  We’re moving marijuana out of the shadows, regulating it for consumer and community safety, and dedicating new tax revenues to keeping kids healthy, and keeping them in school.  We’re finally taking marijuana out of the criminal justice system and treating it as a public health issue.  Thank you, Washington State voters, for your leadership.

But most importantly, today I want to thank James Lathrop and his staff.  They and other small businesses across the state are undertaking the formidable challenge of creating this new legal marketplace and proving that we can do better than prohibition.  I hope we all will support them and honor their hard work and sacrifice. Thank you, James, thank you, Pete, and thank you, Washington.