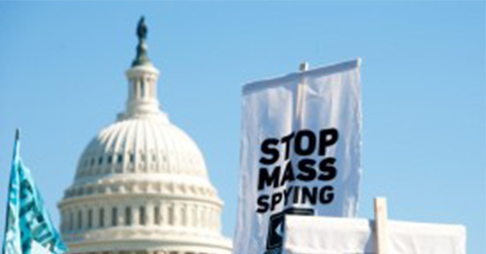 The past few years have seen numerous attempts to reform the notorious Patriot Act and its problematic provisions which the NSA has interpreted to permit unprecedented dragnet surveillance. None have been successful, thanks in large part to the continued fearmongering of the “war on terror.”

But that could change. Three of the Patriot Act’s infamous provisions are about to expire, and Congress can dramatically rein in the NSA’s unfettered surveillance by simply doing nothing. That is, it can just let them expire.

The most important of these three provisions, Section 215, has been cited to authorize the mass collection of every American’s phone records. The ACLU has sued the United States federal government over this program, but the government still maintains that it has the right to suck up the call records of millions of innocent Americans. If Congress does not reauthorize this provision, it will strike a significant blow to the ever-growing surveillance state.

Lawmakers on both sides of the aisle have continued to promote warrantless surveillance of the American public. This has happened despite ongoing doubts about the value of the NSA’s massive surveillance programs, an admission by the White House that the bulk collection program is not necessary, and the failure of the federal Privacy and Civil Liberties Oversight Board to find a single time where bulk collection was vital to counterterrorism efforts.

Sen. Mitch McConnell recently introduced a bill that would extend the expiring provisions through 2020. This bill aims to maintain the status quo of treating every American like a suspected terrorist. It supports practices which enable the NSA and other government agencies to create an intricate web of information detailing the relationships and activities of people’s lives. Who you call, when you call them, and how long you speak with them may seem like innocuous information, but consider that this includes calls made to sexually transmitted disease clinics, suicide or drug abuse hotlines, therapists, or labor unions.

Another bill, the USA Freedom Act recently introduced by Sen. Patrick Leahy, seeks once more to reform certain provisions of the Patriot Act. Though the measure’s aims are admirable, it still reauthorizes problematic surveillance and contains loopholes related to accountability and transparency.

Instead of continuing to tinker with failed programs that undermine our civil liberties, Congress should let the expiring provisions of the Patriot Act expire for good.