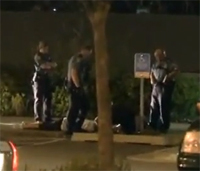 We’re deeply disturbed by this video showing Seattle Police Officers kicking and yelling racial slurs at an individual of color who appeared to be offering no resistance. We recognize that the video is the subject of ongoing investigations, and it is, of course, important to protect the due process rights of the officers involved.

But let’s be perfectly clear—using racial slurs or threatening to harm someone because of his race or ethnicity is never acceptable under any circumstances. Police officers have great power to be the enforcement mechanism of our laws. But let’s not forget—it is we as citizens and residents who delegate that power to them. Which is why it is extremely disturbing to see that power being abused by those in whom so much trust is placed.

The epithets yelled by the officer in question were racist and wrong, plain and simple. This kind of behavior by police hurts trust between communities and those who police them, and that makes community policing much more difficult. Yet community policing based on that kind of trust is the only way we can get a handle on issues like panhandling and street crime—issues that have been the subject of high-profile, problematic laws in recent weeks and months. So this kind of incident has public safety ramifications that go well beyond the individuals involved.

In addition, this incident should make us think twice about enacting laws that are neutral on their face but invite abuse. For example, we have seen more and more how labeling an individual a gang member is used to justify taking away that individual’s due process rights. But let’s be clear again—what happened in that video was wrong, no matter whether the individual involved was a gang member or not. Other examples of problematic laws include the recently enacted Arizona law that invites racial profiling, or the many overly broad gang laws that have been and continue to be proposed in Washington. We must be vigilant when we enact these laws, because all it takes is for the wrong individual to be tasked with enforcing them, and we suddenly have selective enforcement by race.

Given all this context, what should happen now?  First, given that there was clearly racial animus involved, we encourage that this incident be investigated as a hate crime.  If the facts show that this was a hate crime, then appropriate action should be taken against the perpetrators.

Second, this is also a systemic issue—an issue of internal practices and standards.  The fact is, by the time you get to the point at which an officer is yelling racist epithets and abusing his power through use of violence, it’s too late.  We need to stop this kind of behavior through better training.  The last two reports by the police department’s Office of Professional Accountability Auditor, October 2008 - March 2009 and June - November 2009, both called for more de-escalation training for officers, and we agree—the officers in this case were escalating, not de-escalating.  Our office will continue to work with OPA to improve de-escalation and anger management training for officers.

Although some may think we’re currently living in a post-racial society, nothing could be further from the truth.  This is an opportunity for our city to face the issue of racism in police enforcement head on, and ensure real accountability.  We hope that our leaders won’t miss the chance.