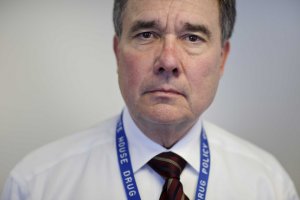 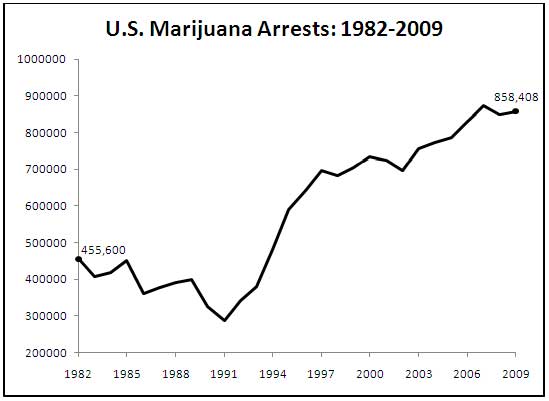 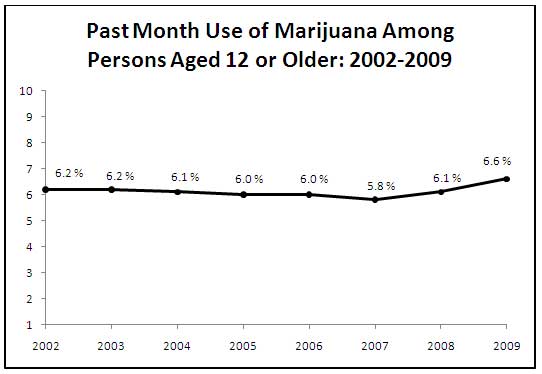 Last week saw the release of two annual federal government reports which highlight the pervasiveness of marijuana in the U.S. Unfortunately, only one of these reports received attention from U.S. Drug Czar Gil Kerlikowske. Here’s a quick summary of the two reports as they relate to marijuana:

Each year the FBI produces analysis of its Uniform Crime Reporting Program (UCR), which tabulates arrest data from across the U.S. As has been the case for the last several years, arrests for marijuana were at near-record highs.

The vast majority of marijuana arrests are for possession only, accounting for roughly 90% of the arrests. In fact, possession alone is one of the most common crimes for which people get arrested in the U.S.:

Here in Washington, there about 12,000 adult marijuana arrests per year.

The 2009 National Survey on Drug Use and Health (NSDUH) was also released last week. This survey, conducted by the Substance Abuse and Mental Health Services Administration (SAMHSA), is a scientifically conducted annual survey of approximately 67,500 people throughout the country, aged 12 and older. It provides trend data on a variety of issues, including marijuana use. In 2009, reported marijuana usage was up.

According to NSDUH, past month marijuana usage for persons aged 12 or older in Washington state is 7.44 %, which is greater  than the national average, (combines 2006 and 2007 data).

So which report did the Drug Czar choose to issue a press release on? You guessed it, the NSDUH report. Here’s what he had to say:

“The findings are disappointing, but not surprising. Youth attitudes about the dangers of drugs have softened in the past couple of years. In the past this has often signaled that increases in use are coming.

The good news – we know what to do. The National Drug Control Strategy, released in May, emphasizes prevention, early intervention, treatment, smart law enforcement and support for people in recovery from addiction.”

As this blog has pointed out, the Drug Czar’s shift in rhetoric has done very little in practical terms. The vast majority of money spent by the federal government on drugs continues to fund law enforcement, not “prevention, early intervention, treatment…and support for people in recovery from addiction.” And even though this rhetorical shift is a welcome change from the militaristic language used by previous administrations, policy change ultimately is what matters.

The marijuana arrest statistics listed above are staggering and if an arrest leads to a conviction, as it often does, it can lead to a lifetime of collateral consequences. These include loss of employment, loss of housing, loss of voting rights, loss of federal financial aid for college, seizure and forfeiture of property, termination of child visitation rights, and deportation for legal immigrants. If an arrest results in incarceration, the offender will face lower job prospects and have diminished earning capacity. Even if someone is merely arrested for using marijuana and doesn’t actually get charged, they will still bear the stigma of being labeled a criminal. Why not mention this in a press release?

The basic issue is whether arresting almost 800,000 people for marijuana pbossession is “smart law enforcement.” After all, it doesn’t seem to have much effect on marijuana usage rates (see graph above). Perhaps it would be wiser to actually invest in the proven “prevention, early intervention, and treatment” programs and leave responsible adult marijuana users alone. Here’s to hoping we see a press release like this soon: “Arresting Marijuana Users Does More Harm than Good, New Federal Policy to Redistribute Law Enforcement Dollars on Treatment and Prevention.”