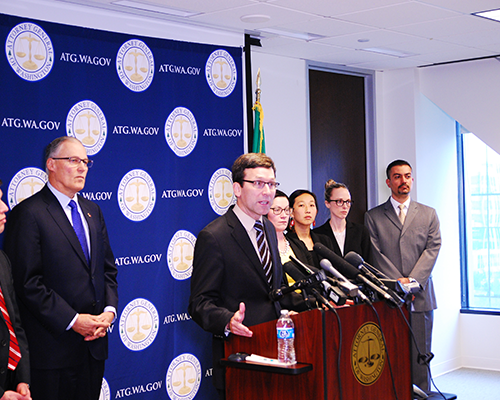 The ACLU of Washington submitted a friend-of-the-court brief supporting the lawsuit filed in federal court by Washington Attorney General Bob Ferguson on Jan. 30 seeking to have key provisions of the President’s Executive Order on immigration declared unconstitutional. The brief includes dramatic stories from Washington residents about the personal hardships they are suffering as a result of the order.

“The harms of the Executive Order are reverberating across our community. Numerous individuals have contacted the ACLU of Washington to seek advice on how best to curtail its harm to themselves, their families, and their loved ones. It has made many Washington residents feel uncertain about the future and the stability of their jobs, their education, and their right to travel freely,” said ACLU of Washington Legal Director Emily Chiang.

The brief includes heart-breaking stories from some of the many people residing in and with ties to Washington who have contacted the ACLU-WA and are now unable to see their families or loved ones as a result of the Order. Among them are:

The brief says that the Order is discriminatory and is driven by animus toward Muslims, as confirmed by the President’s own public statements and the lack of any rational justification for the categorical exclusion of individuals from the seven identified nations, where approximately 96% of the citizens practice Islam. The ACLU urges the Court to grant the State’s motion for a Temporary Restraining Order and spare Washington residents and families from further irreparable harm.