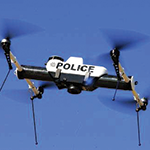 Despite Broad Bipartisan Support from Legislature, Bill to Regulate Government Drones Is Vetoed

Despite gaining broad bipartisan support from legislators, a bill to provide reasonable regulations for state and local government use of drones was vetoed by the Governor today. The legislation, EHB 2789, passed the Senate with a 46-1 vote and the House with a 77-21 vote.

“We are deeply disappointed that the Governor vetoed this well-balanced and carefully considered legislation. The action was a missed opportunity to uphold Washington’s strong tradition of privacy, and protect all Washingtonians from government surveillance now,” said ACLU of Washington Executive Director Kathleen Taylor.

“The Governor’s moratorium shows exactly why we needed the bill in the first place – to put in place rules around procurement and use of drones, and clear standards for what the government is allowed to do and what it is not. Legislation must ensure that government does not use the game-changing technology of drones for suspicionless general surveillance,” Taylor said.

The Governor also said he is putting together a task force for a bill regulating government drone use and acquisition to be enacted next year. Legislation to regulate drones has been proposed in 43 states and enacted in nine.  The Governor cited “ambiguities” in vetoing the bill, but did not clarify how the bill should have been different in his view.

“We are encouraged that the Governor has expressed his support for a drone bill to protect the privacy of all Washingtonians, and has recognized the deep and broad concern among both lawmakers and the public. We will hold the Governor to his word that he will support making this happen next year,” said ACLU of Washington Legislative Director Shankar Narayan.

Unmanned aerial drones give the government unprecedented capabilities to engage in surveillance and other activities that infringe on privacy. They do not have the physical, logistical, or economic limitations of previous methods of information collection, such as fixed camera networks or manned aerial surveillance. Since they are unmanned, they can operate for longer periods of time at a lower cost. And they may be equipped with new surveillance technologies, such as high resolution cameras and facial recognition, that enable them to intrusively collect personal information.

The bill would have required legislative approval before an agency acquires drones.  The bill allowed agency use of drones without a warrant for a list of specified legitimate uses as well as emergencies, but law enforcement agencies would otherwise have had to obtain a warrant before using drones.  And agencies would have been required to report how and how often they use drones, to give the legislature and the public more transparency in understanding how these technologies are being deployed.