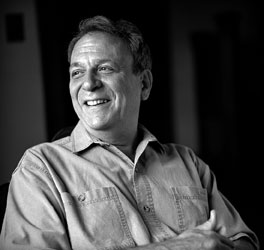 The ACLU of Washington Board of Directors has selected Phil Bereano, a forceful and tireless civil liberties advocate in both academia and the wider community, to receive the 2009 William O. Douglas Award. The Board is also honoring Jeff Robinson and Amanda Lee, two courageous attorneys who are seeking to uphold American values in proceedings for detainees at Guantanamo, with Civil Libertarian Awards. And Colin Moyer, a thoughtful and determined student who stood up against teaching creationism in a public school science class, is receiving the Youth Activist Award.

The William O. Douglas Award is given for outstanding, consistent, and sustained contributions to the cause of civil liberties and freedom. Phil Bereano is being recognized for his lifetime of activism for civil rights and his pioneering efforts addressing the impact of technology on civil liberties.

Phil Bereano was a member of the University of Washington faculty from 1975 to 2005 and is now a professor emeritus. His academic work focused notably on the social management of technology, stressing impacts on the civil liberties and privacy implications of technological developments. A founding member of the Council for Responsible Genetics, he helped define the notions of genetic discrimination and genetic privacy. He was co-developer of the world’s first courses on “women and technology” and “ethnicity and technology.”

As the AIDS crisis developed in the 1980s, Bereano was an outspoken advocate in countering fear-driven curtailments of civil liberties and worked to protect the LGBT community from discrimination. He co-founded Seattle’s chapter of ACT UP (AIDS Coalition to Unleash Power) which established a pioneering on-the-street AIDS prevention needle exchange and was known for its bold activism. Bereano also chaired served the UW president’s task force which recommended changes to address challenges facing LGBT students, faculty, and staff.

Bereano is an active and long-time member of the ACLU who served on the ACLU-WA Board from the late 1970s to the mid-‘90s. He has served on the National Board since 1994 and chairs the Committee on Data Collection, Storage, and Dissemination. He continues his advocacy work through public speaking, media interviews, op-ed pieces, and writing for various media.

The Civil Libertarian Award is given for recent outstanding contributions to the ACLU-WA or to civil liberties in Washington state. This year the ACLU-WA is honoring attorneys Jeff Robinson and Amanda Lee for their courage and dedication to principle in seeking to provide fairness for detainees at Guantanamo Bay. They are attorneys with the Seattle firm Schroeter Goldmark Bender.

Robinson and Lee are participating in the John Adams Project, a joint effort of the ACLU and the National Association of Criminal Defense Lawyers to involve some of the country’s best criminal defense attorneys in representing Guantanamo detainees. Recognizing the grave flaws of the military commission system at Guantanamo, the project’s attorneys strive to provide a defense that reflects American values and our commitment to due process.

The honorees have endured many challenges and taken many risks to see that the accused have effective representation. Sacrificing personal and professional interests, they have traveled repeatedly under intense security conditions to the U.S. military base in Cuba. There, Robinson and Lee worked in challenging physical conditions while coping with newly devised and secret legal proceedings designed to undermine any reliable testing of the government's case.

Each year, the ACLU-WA also recognizes a young person or group whose activism exemplifies work to defend and extend liberty and justice for all. This year’s recipient of the Youth Activist Award is Colin Moyer, who showed leadership and drive in challenging the teaching of creationism in a high school science class and in promoting freedom of speech for fellow students.

As a sophomore at Curtis High School in University Place in Pierce County, Moyer was shocked when his popular biology teacher began teaching a view of evolution that focused more on religious views than on scientific facts and didn’t tolerate criticism. Reading books and articles on evolution, he soon realized that the teacher was promoting creationism in the guise of “intelligent design” – the same approach that was ruled unconstitutional in a 2005 ACLU case in Pennsylvania (Kitzmiller v. Dover). With support from the ACLU-WA and the National Center for Science Education, he worked out an agreement with the school administration that stopped the teaching of intelligent design.

Moyer then tackled freedom of speech at his school, where the official student newspaper had ceased publication. He recruited a student staff to produce an alternative newspaper, The Viking Underground, which the Student Press Law Center has recognized as an exemplar of student free speech. Moyer also helped student at other schools whose newspapers were being censored. Earlier this year, he was one of 16 high school seniors awarded a National ACLU Youth Activist Scholarship for his commitment to civil liberties. He now attends Occidental University in Los Angeles.