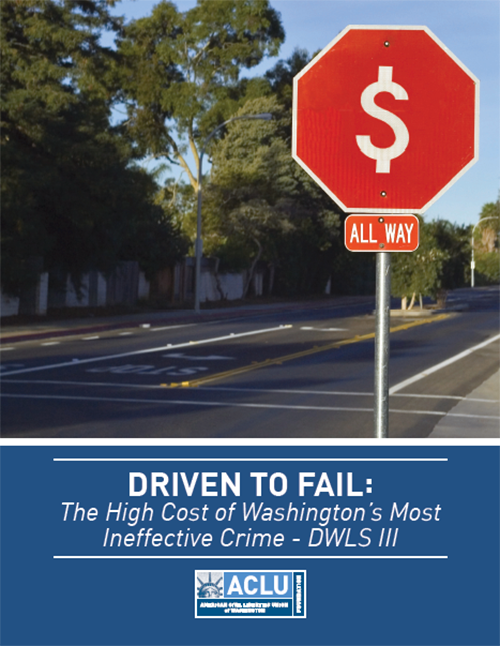 The ACLU of Washington today issued a report examining the most commonly charged crime in the state – Driving While License Suspended – Third Degree (DWLS-III). “Driven to Fail: The High Cost of Washington’s Most Ineffective Crime – DWLS III” describes the costs of enforcing this law, explores how it burdens individuals and communities, and calls for policies that address the harm of driving with a suspended license without criminalizing it.

“Not every social problem needs to be treated as a crime,” said Mark Cooke, the ACLU of Washington’s Campaign for Smart Justice Policy Director. “DWLS III enforcement costs taxpayers millions of dollars, yet does little to improve public safety. The crime is largely punishing people for being poor, not because they are scofflaws or dangerous drivers,” said Cooke.

Typically, a DWLS III charge comes about this way: A driver receives a ticket for a moving violation (such as speeding or rolling through a stop sign) and for various reasons does not follow through by paying the ticket or showing up in court to contest it. Hundreds of thousands of people in Washington have had their license suspended for not responding to a ticket for a moving violation. Those who continue to drive once their license is suspended may be arrested and charged with the crime of DWLS III.

The report estimates that Washington taxpayers have spent more than $1.3 billion enforcing this crime between 1994 and 2015. These costs stem from the filing of nearly 1.5 million DWLS III criminal charges, resulting in nearly 900,000 convictions. In 2015 there were nearly 40,000 DWLS III charges filed, costing taxpayers $42,199,270. The report also shows that the law is applied unequally across the state and disproportionately impacts people of color, the young, and the poor.

Steven Gaines, a young father from Chelan County, has been charged with DWLS III multiple times because of his inability to pay fines associated with tickets from moving violations. He has been forced to spend time in jail because of DWLS III charges.

“I have no choice except to drive in Chelan County to get to work and to transport my children. I didn’t even know my license had been suspended the first time I was charged with DWLS III, and once the fines started adding up it was incredibly hard to find the money to get my license back,” said Gaines.

The report recommends that the crime of DWLS III should be taken off the books. Short of that, law enforcement, prosecutors and courts can exercise their inherent discretion and treat DWLS III as a civil offense and offer relicensing programs. Civil remedies and relicensing can be more effective and use fewer criminal justice resources. The data in the report shows that some jurisdictions, such as the cities of Yakima and Seattle, have started to treat DWLS III as a non-criminal offense.