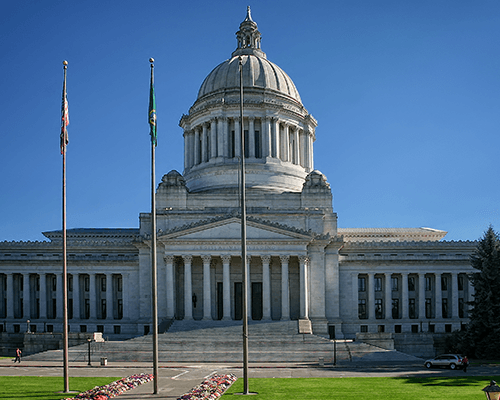 Keep Drivers Licensed and Insured: Reform DWLS3
HB 1282 and SB 5328
Driving While License Suspended – Third Degree (DWLS3) is the most commonly charged crime in Washington. It wastes criminal justice resources and unfairly targets people of color and young drivers. Typically, a DWLS3 charge occurs when a driver receives a ticket for a moving violation and does not pay it or contest it in court. This leads to license suspension, and if the person is later stopped while driving, a criminal charge may be filed. Suspending licenses for failing to comply with moving violations and then charging drivers with the crime of DWLS3 is counterproductive and unfair. This bill reforms DWLS3 to keep more drivers insured and free up scarce criminal justice resources.
Automated License Plate Readers
HB 1663 & SB 5529
This bill allows existing uses of automated license plate readers (ALPRs), such as AMBER alerts and finding stolen cars, while ensuring that the government does not use ALPR data to track motorists without suspicion. It puts rules in place to delete innocent motorists’ data, protecting against mission creep, data breaches, and abuse. These protections are critical given that federal and local agencies have used this technology to conduct unwarranted surveillance on immigrants and Muslims, among others.
Keep Washington Working
SB 5497
One in seven Washington workers—nearly one million people—are of immigrant background. The Keep Washington Working Act (KWW) protects privacy and civil rights by prohibiting local and state law enforcement from questioning people about immigration status and facilitating civil immigration enforcement. When local police are viewed as an extension of federal immigration enforcement, noncitizens are less likely to report crime or appear as witnesses, making us all less safe. This legislation prevents federal immigration agencies from commandeering scarce local public safety resources, eroding community trust, and negatively impacting our state’s economy, while supporting our agricultural labor workforce’s opportunity for upward economic and social mobility.
Protecting Patient Care Act
HB 1608 & SB 5542
The Protecting Patient Care Act (PPCA) protects the privilege and privacy of the patient-provider relationship by ensuring a doctor, nurse, or other health care professional is not prevented from providing information, resources, and standard of care health services that are in the best interests of their patients. This legislation is necessary because a sharply increasing number of health systems in Washington prohibit or limit the information, resources, and services a health provider may offer to a patient. Such prohibitions hurt patients and they disproportionally harm women, the LGBT community, and people who need end-of-life care.
Responsible Teen Communications
HB 1742
Current Washington law creates stark consequences for teens who take explicit images of themselves, and share these “selfies” with another person, usually someone they are dating. Teens prosecuted for this behavior under current law could face felony charges, prison, sex offender registration, loss of financial aid for college, and lifelong difficulties finding employment and housing. This bill focuses on building evidence-based education and prevention, limits criminal penalties for youth who engage in consensual sharing of explicit images, and maintains protections against harassment, voyeurism, and other related malicious acts.
Tech Fairness
HB 1655 & SB 5527
This pioneering bill establishes and enforces minimum standards of fairness and transparency for automated decision-making systems, which governments are rapidly deploying to replace human decision making in hiring, housing, health care, policing, and many other areas. Although touted as eliminating bias, these systems can be inaccurate, perpetuate biases, and introduce new ones, often with a disproportionate impact on vulnerable communities. For example, one system suggested longer sentences for people of color than for white individuals convicted of the same crime. Vendors use current laws to keep the inner workings of these systems secret, preventing the government or the public from inspecting and analyzing their performance. This bill gives lawmakers and the public alike the information they need to make informed decisions about how these technologies are deployed.
New Hope Act
HB 1041
Everyone deserves a second chance. However, criminal records continue to punish people long after they’ve served their sentences and due to racial disparities in arrests and convictions, people of color are disproportionately impacted by collateral consequences. While Washington has long enabled people to clear convictions from their record by “vacating” them after they’ve gone years without re-offending, the process is limited and complex. The New Hope Act reduces barriers and helps people re-enter society by improving the process for certifying that a sentence is completed and allowing multiple convictions to be vacated.
Death Penalty Repeal
HB 1488 & SB 5339
This bill repeals Washington’s death penalty law. Last October, the Washington State Supreme Court declared it unconstitutional because it had been “imposed in an arbitrary and racially biased manner.” These racial disparities are greatest in the numbers of Black people on death row and those who have been executed. Death penalty cases also require our greatest procedural safeguards, which delay resolution and drain resources. Courts have declared Washington’s death penalty statute unconstitutional four times since 1972. It is time to stop trying to fix an unfixable law.
I-940 Amendments
HB 1064 and SB 5029
This bill clarifies the “good faith” standard for use of deadly force by police. Initiative 940 eliminated the requirement that prosecutors prove an officer acted with “malice” in order to impose criminal liability for killing. However, I-940 still called for proof of the officer’s subjective intent. These bills simplify good faith as solely an objective standard that considers all facts, circumstances, and information known to the officer at the time and asks whether a similarly situated reasonable officer would have believed the use of deadly force necessary to prevent death or serious physical harm to the officer or another individual.
Explore More:
Abortion
Border Patrol & ICE
Criminal Justice
Criminal Records
Death Penalty
Death with Dignity
Debtors' Prison
Due Process
Economic Justice
Gender Equity
Healthcare Access
Immigrant Rights
Juvenile Justice
Mass Incarceration
Policing
Privacy
Racial Justice
Racial Profiling
Reproductive Freedom
Surveillance
Technology
Youth