The Problem of Police Overtime: The Case of the Seattle Police Department


In our Follow the Money post from last month, we provided a critical analysis of the 2020 Adopted City of Seattle Budget which showed how the Seattle Police Department (SPD) budget eclipsed the budgets of many city departments dedicated to essential services including housing, human services, and education. On November 23, 2020, the City of Seattle passed its 2021 budget with modest cuts to the SPD budget, much of it a result of transferring police functions to other city departments which does not free up money for community investments.[i]  The debate around whether and how much of police budgets should be cut and reinvested in other city services or community organizations, which help alleviate the conditions that lead to crime in the first place, is a continuing and arguably long-term one. This post on police overtime will scrutinize the SPD budget itself, focusing on the 2020 Adopted Budget. The goal is to provide transparency into how the SPD actually spends its budget and to provide a basis on which to begin rethinking how this money can be allocated differently to better serve our communities in the pursuit of public safety for all. Although the focus of this analysis is the Seattle Police Department, the problems associated with police overtime that are detailed below are not unique to the SPD.


How Big is SPD’s Overtime Budget?

Overtime pay is an important labor tool for compensating workers for the extra time they have worked. However, as will be explained in detail below, SPD’s already outsized overtime (OT) budget is problematic. The overtime budget alone is substantially larger than most other Seattle departments, and it has become a backdoor way of growing SPD’s budget, with little oversight as to how this money is spent.

SPD’s 2020 overtime budget is nearly $30 million ($29,827,288), which makes up about 7 percent of the SPD budget. Table 1 provides a breakdown of how the SPD divvyed up its overtime budget for this year (note that this table only reflects the budget, not expenditures, i.e. actual spending, a subject that will be discussed below).

*Revenue streams are from the General Fund and the School Safety Traffic and Pedestrian Improvement Fund.
**The Events category includes planned demonstrations, dignitary protection, concerts, street fairs, parades, fun runs, and July 4th activities, among other items. This category does not include unplanned demonstrations, such as the ones that occurred over the summer in the wake of the murder of George Floyd. Those were considered “unusual occurrences.”

***The entire budget for the Professional Standards Bureau is $4.6 million—and $3.8 million of it is overtime.

****This includes $847,863 that the City Council added in one-time funding for emphasis patrols and patrol augmentation. Emphasis patrols are essentially extra patrols deployed in certain neighborhoods based on need, determined by community feedback and analysis conducted by the SPD. They are funded entirely by overtime funds.

To give you some context for the size of the SPD’s overtime budget, it is bigger than the entire budgets for half (i.e. 20) of the City of Seattle’s departments.

When compared with other departments, the SPD overtime budget alone is (see Figure 1): 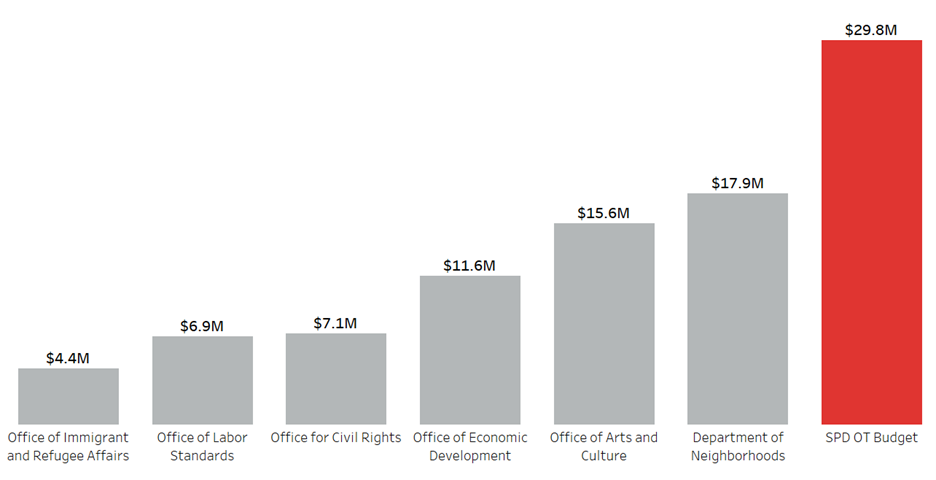 Here’s another way to think about how outsized the SPD overtime budget is. Consider that it is more than three times larger than the budgets for all three of the police accountability entities combined (Figure 2).

When compared to each of these accountability entities, the 2020 SPD OT budget alone is (Figure 3):

The SPD regularly exceeds its overtime budget by millions of dollars. The problem of SPD overtime overspending is well-documented. A 2015 memo from the Seattle City Council’s Central Staff states plainly: “Overtime has been a significant budget issue for SPD for decades.” Data from that report shows that between 1995 and 2014, in all but one year, the SPD exceeded its overtime budget by anywhere from 1 percent (in 2010) to 64 percent (in 2014) (Figure 4). 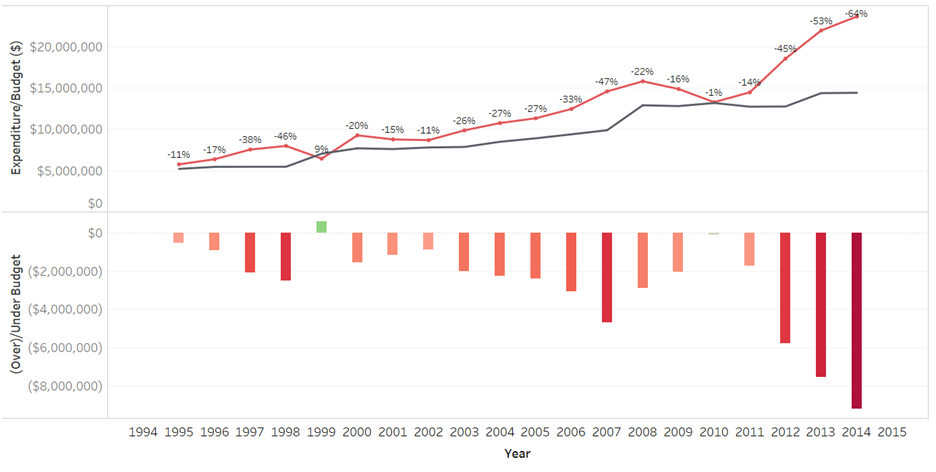 *The over/under budget amount for the years 1999 and 2014 differ from the data in the original memo as a result of what appears to be mathematical errors in the latter that have been fixed here.

A 2016 audit of the SPD, requested by then-police chief Kathleen O’Toole in late 2014,[ii] concluded that overtime budget overages were in part a result of problems with internal controls on overtime, including: According to the City Auditor, these led to overtime errors and inefficiencies, including 400 potential duplicate payments for overtime hours in 2014 that totaled more than $160,000.

Although some progress has been made towards implementing the City Auditor’s thirty recommendations for improving SPD’s overtime practices and processes, a report issued in late 2018 by an interdepartmental team convened at the behest of the City Council, as well as recent reporting from the Seattle Times from August and September of this year, show that (1) the SPD continues to exceed its overtime budget even as that line item grows and (2) the issues raised in the City Auditor’s report from four years ago persist (despite the fact that the SPD concurred with both the Auditor’s findings and recommendations). According to the Seattle Times, in 2019 one officer made nearly $214,544 in overtime (not including $37,656 in retroactive overtime pay and his regular pay of $128,716).[iii] However, inadequate controls governing documentation, monitoring, and oversight of overtime processes and practices continue to obscure how he did so. For example, overtime pay and standard pay continue to be  documented and tracked via two different systems; overtime pay is tracked via a paper system while standard hours are logged electronically, making it challenging, if not impossible, to reconcile the two systems and detect mistakes or false reporting. Moreover, the SPD still lacks an automated system to catch mistakes or inappropriate use of overtime.


Overtime and the SPOG Contract

The other side of the coin is that provisions of the police union (Seattle Police Officer Guild, or SPOG) contract are exceedingly generous with regard to providing overtime pay for police duties conducted outside of regular shift hours, thus incentivizing its use:


How does police overtime relate to the issue of police divestment/reinvestment and public safety for all?

Where the SPD cannot cover the overage with savings from their own budget, the Mayor and City Council mitigate the difference by providing supplemental budget appropriations (i.e. increased appropriations to the SPD) to balance its budget. What this means in practical terms is that although the SPD budget is already outsized, and much larger than the majority of other city departments, overtime is a loophole which allows the SPD to grow their budget even more on the backend. In spite of the restraint on spending that a budget ostensibly creates, SPD’s overspending practices, as Council President M. Lorena González has described them, means they have a “blank check” for overtime. This has been the practice for decades.

This is not just about uncontrolled overtime expenses. SPD overtime hours worked have also increased dramatically—53% since 2006, from 260,000 to 398,000 hours. A growing body of research shows there is a connection between problematic police practices and overtime/overwork. Thus, overtime usage goes beyond being a budget issue. Among other things, this research shows that the fatigue associated with working long hours/off-duty may worsen pre-existing racial biases and increase the chances that officer will be involved in a use-of-force incident.[vii] Over the course of 12 days of protests that took place this summer (May 29 – June 9) following the murder of George Floyd by the Minneapolis Police Department, the SPD spent $6.3 million and 72,619 hours in overtime.[viii] During that period, officers escalated violence against peaceful protestors and suppressed and intimidated free speech. In the span of a week, 15,000 complaints of police misconduct were lodged with the Office of Police Accountability. The ACLU-WA, along with the Korematsu Center and Perkins Coie, has since filed suit against the City on behalf of Black Lives Matter Seattle-King County, arguing that the use of chemical agents and projectiles for crowd control is an excessive use of force that violates the Fourth Amendment. Notwithstanding these issues, examples out of New York and Chicago, among other places, show how overtime pay can create perverse incentives for police and drive racially discriminatory policing.


SPD’s overtime issues are part of their accountability problem.

The issue of overtime that has plagued SPD is emblematic of larger problems of accountability that plague the department. Despite years of efforts to get SPD to get control of its overtime spending, it has eluded responsibility while both its overtime budget and expenditures continue to grow. Recent events may signal a departure from past years. Over the summer, in the wake of mass protests against racialized police violence, the City Council passed a resolution which states explicitly that the Council “will not support any budget amendments to increase the SPD’s budget to offset overtime expenditures above the funds budgeted in 2020 or 2021.” Although the City Council will grant the SPD’s $5.4 million fourth-quarter supplemental budget request, which includes police expenditures on overtime, the City Council has expressed its “intent” to pass legislation which will cut that same amount from the SPD’s 2021 budget.

Want to voice your opposition to SPD’s abuse of overtime pay and express your support for passage of the Seattle City Council’s legislation to hold SPD accountable for their problematic overtime practices? Identify and contact your City Council member here and or sign up for public comment/submit your written comments here. For more information about the City of Seattle budget process and how to provide your input, see our last blog post!

[i] The 2021 budget cut police spending by about $70 million, or 17%. The Mayor’s proposed cuts included (1) moving some police functions such as parking enforcement and 911 dispatch out of SPD into other city departments ($38.3 million) and (2) through officer attrition (i.e. officers left the force, creating vacant positions that are then abrogated—about $22.4 million, including a $2.7 million reduction in overtime for events and emphasis patrols). The City Council’s budget package included an additional $12 million in cuts by abrogating a few dozen more officer positions that are unlikely to be filled next year and reducing overtime, among other things.
[ii] The audit was in part a response to a 2014 report by the Office of Professional Accountability (now known as the Office of Police Accountability) which found that in 2013, as a result of poor control over overtime processes, the SPD spent $1 million in excessive overtime. Among other details, the report indicated that officers received overtime pay on the same days they took leave or were on vacation, and in the case of one officer, was compensated for 31.5 hours of work in a 24-hour period.
[iii] This is an extreme case but there were 160 other SPD employees who made at least $50,000 in overtime last year (not including any retroactive payments).
[iv] Section 5.4, “Overtime,” “An employee on vacation may voluntarily work an overtime detail unrelated to their normal assignment. The employee shall receive overtime compensation for the detail.” p. 30.
[v] Section 5.6, C, D, “Overtime Pay for Court Appearances,” p. 31.
[vi] Section 5.7, “Overtime Pay for Off-Duty Telephone Calls,” p. 32.
[vii] See also Blake, David M. and Cumella, Edward (2015), “Factoring Fatigue into Deadly Force Encounter: Decision-Making and Rection Times,” Law Enforcement Executive Forum 15(1), available at https://www.researchgate.net/publication/284553924_Factoring_Fatigue_into_Police_Deadly_Force_Encounters_Decision-Making_a....
[viii] Seattle City Council Select Budget Committee, “Responses to Questions Asked at the SPD Budget Presentation on June 10, 2020,” Presentation by Greg Doss, Central Staff, June 24, 2020, available at http://seattle.legistar.com/View.ashx?M=F&ID=8631774&GUID=73D333E8-68FE-444B-8AFB-13D8F1054DA6 (p. 1). “1,296 sworn and civilian support employees were deployed in connection with the demonstrations. SPD utilized a 12-hour deployment model to ensure adequate staffing was available.”
Explore More:
Policing
Racial Justice
Read More