Earlier this year, we asked the question: What will it take to stop police violence? Over the past decade, one out of every five homicide victims in Washington have been killed by a law enforcement officer. Police have killed 122 people since I-940 passed in late 2018, requiring training in de-escalation and mental health crisis response. 2020 saw thousands of people protesting police brutality in the wake of the killings of George Floyd, Breonna Taylor, Manny Ellis and too many others.

In this context, the Washington Coalition for Police Accountability (WCPA), the ACLU-WA, and many other organizations, proposed and advocated for state legislation to address the longstanding failure of law enforcement to curtail biased policing and their growing reliance on the use of deadly force. More than a dozen bills were passed in April 2021, addressing police use of force, banning certain police tactics, strengthening de-certification, etc. and many went into effect in July of this year, representing a “sea change” in police practices and accountability in Washington.

We are already seeing the benefits of these changes. Analysis of 2021 data[1] on the number of people killed by police in Washington state shows a remarkable 62% decline compared to the same period in each of the last two years. This means 30 more people are still alive – 30 more families have been spared the heartbreak and trauma of losing a father, a son, a friend, or another loved one. This is the beginning of the transformation we hoped to achieve.

In the months of April and July 2021, for the first time in six years, there were zero people killed by police. To put that in context, in the entire period from 2010-2020 there were only 6 months (out of 132) in which no one was killed by police; this year, to date, there have been 2. Anecdotal evidence from police themselves suggests that they have changed their behavior in response to the legislation and are exercising more restraint in using force. The data back that up, and strongly suggest that this legislation is a key driver of the decline in deaths.

While some members of law enforcement have embraced these changes, noting that they were already operating in compliance with the new requirements, many others have pushed back against these new laws in well-orchestrated social and traditional media campaigns. However, the examples often cited by those who oppose the changes show the laws are working as intended. Officers are thinking twice before using force, especially deadly force, and are spending more time deescalating situations before resorting to violence. They may complain that the new laws require them to take more time per incident, but that time is what reduces the chance that a life will be taken unnecessarily, and this is exactly what people across Washington marched and advocated and voted for.

And yet, there is still work to be done. Since the passage of I-940 on December 6, 2018, and as of November 2021, 122 people have been killed by police Washington state, and there is clear evidence of racial disparities in these killings. We dig deeper into these trends below.

Police killings have declined dramatically in 2021.
Compared to the same time last year, the overall number of people killed has fallen from 47 to 18 – a nearly 62% drop. As the plot below shows, there is some variability from year to year, but you would have to go back to 2015 to find a year with as few cases as 2021. The declines are evident in both deadly shootings and other causes of death in police encounters.

The second most common cause of death is vehicle chases; these deaths include bystanders and sometimes even other police officers. Many departments in Washington, such as King County, recognizing the dangerous nature of these chases and had already restricted them before the 2021 legislation established a statewide standard. That standard took effect in July, and deaths resulting from vehicle chases are down this year by 50%. The decline is welcome news, but this number has more variation from year to year, so we will need to monitor it over time before any persistent change can be identified. 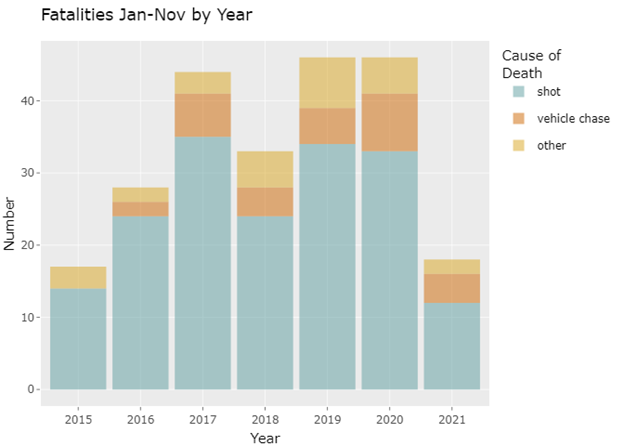 The evidence suggests the declines are real – and persistent.
The impact of the 2021 legislative changes appears to be a sustained reduction in the number of people killed by police.  While 2021 started out about the same as the previous 6 years, with an average of about 3 people killed per month, that changed abruptly in April. While previous years display wide variability in the number of people killed each month – typically ranging from 1 to 11 and averaging around 3-4 – what we see as the policing bills passed the legislature in April 2021, is the first month with zero killings in 6 years, and no months with more than 3 people killed. The decline is particularly steep compared to the last 2 years: in both 2019 and 2020, the monthly average number of people killed was about 4.3; in 2021, it has dropped to 1.6. We will need to monitor the data over time to see if these declines do in fact persist. 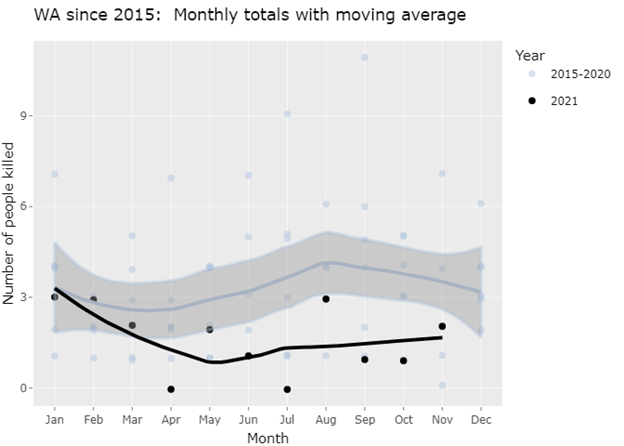 The racial disparities in police killings remain in the post-940 period.
There remains a large racial disparity in the victims of police homicides post-940.  The population of Washington State overwhelmingly identifies as White – 79% in 2020. If we exclude Hispanics (which the Census treats as ethnicity, not race), non-Hispanic Whites comprise 70% of the WA population.

The data shows there is a disparity in the risk of being killed by police – for non-Hispanic Whites, their share of fatalities, 54%, is lower than their population share, 70%.

By contrast, only 4% of the WA population identifies as Black/African American, but 15% of the persons killed by police are identified as being in this racial group.

More work to do in 2022.
The new laws have already made an impact in reducing the rate of police killings in Washington. However, there is still work to be done. Where misconduct has occurred, and where there are trends of excessive use of force or racially disparate policing, officers and departments must be held accountable.

It is not the time to roll back the gains that have been made so far. In 2022, advocates will continue to push the legislature to stand firm behind the good laws passed in 2021 and to continue passing measures that prevent harm and hold officers who harm people accountable. These new laws are making a difference, but we must continue our fight to stop police violence in Washington.
[1] The data we are using tracks all persons killed by police in the US since 2000, and our analysis for Washington state will mostly focus on the period from 2015 to now. This allows us to examine the trends before and after the legislative changes. The data are restricted to police shootings and other incidents that can be classified as homicides by police, including vehicle hot pursuits. It does not include suicides that occur during police encounters or deaths resulting from vehicle accidents. The data are collected from two online sources: Fatal Encounters and the Washington Post.
Explore More:
Policing
Racial Justice