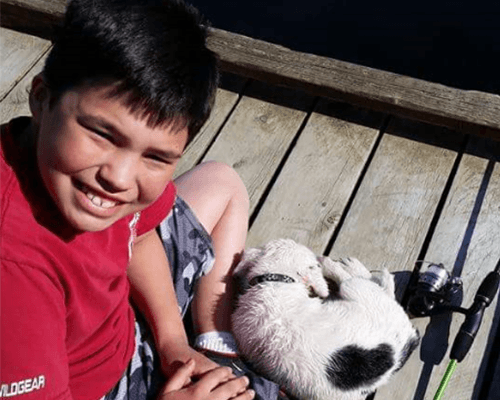 Steven: Punished by teachers—and bullied by his classmates— for his disability

Steven has a heart defect, ADHD, anxiety, autism, and oppositional defiance disorder (ODD). ODD is characterized by irritable mood, argumentative and defiant behavior, and aggression. These conditions have given rise to many issues at school, including altercations with other students and Steven’s inattention in class. As a result of these behaviors, he has been suspended and sent home early, causing him to fail classes.

“The school kept saying that he would get all the help he needs if he gets an IEP,” Bonnie said, “but now he has all the stigma of mental illness and none of the help.”

Steven has endured years of intense bullying by classmates singling him out for his perceived difference, Bonnie said. His classmates call him racial slurs and names, like “retard.” On one occasion, a student kept pouring syrup on Steven at lunch. Steven told the lunch monitor, but they did not do anything about it. The student was allowed to follow Steven outside, where he ran after him calling him slurs and hitting and kicking him.

One of the suspensions occurred after two boys slapped Steven in the back of the head. He told them to stop multiple times, and eventually shoved one of them. Steven’s mother said her son felt so bad about pushing the boy that he went to the principal and told him what he had done. Steven was suspended for the incident.

The last time Steven was suspended for “fighting,” the principal said she would have him hauled down to juvenile hall. Steven is an extremely nervous child, and this threat gave him severe anxiety.

Steven will begin high school this fall, and Bonnie is extremely nervous about it. “When he starts at a new school this year, they are going to take one look at his record and make up their mind about what type of student he is,” she said.
Explore More:
School Discipline
Student Rights
Youth
Court Case:
A.D. v. OSPI
Read More
Related Links