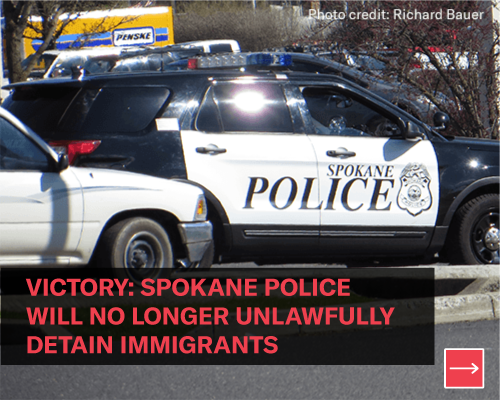 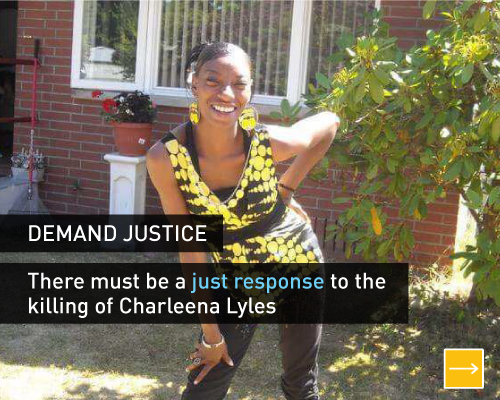 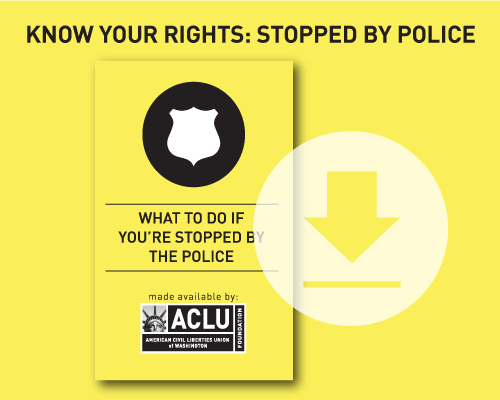 Published:
Tuesday, December 7, 2010
LGBT teenagers are more likely than their peers to be punished by schools, police and the courts, according to a recent Washington Post article which cites the first nationwide study of its kind to highlight these important issues. The study found that LGBT youth are 40% more likely to receive educational and criminal justice-related punishments, such as expulsions, police stops, arrests and incarceration.  These studies confirm what the ACLU has known for a long time: that LGBT students are often discriminated against from a young age, which denies them equal access to education and robs them of future opportunities.
Read more

News Release, Published:
Friday, December 3, 2010
The ACLU of Washington and 34 other civil rights and community-based organizations are requesting that the Civil Rights Division of the Department of Justice investigate whether the Seattle Police Department has engaged in a pattern or practice of violations of civil rights. The action comes in response to a series of incidents in which Seattle police officers inflicted unnecessary and excessive physical violence on residents.
Read more

News Release, Published:
Thursday, November 18, 2010
The recently released footage of an incident during which a Seattle police officer is seen repeatedly kicking an African-American youth is yet another disturbing example in a string of recent incidents in which the Seattle Police Department has engaged in unnecessarily violent confrontations with citizens, all of whom have been people of color.  These repeated incidents over the last 18 months, which have continued unchecked and without forceful intervention by the Seattle Police Department, the mayor, or Seattle’s other elected officials, leads the ACLU to call on the U.S. Department of Justice to investigate whether there is a pattern and practice of civil rights violations by the Seattle Police Department in violation of the constitution and federal law.  The ACLU is preparing a formal request to the Department of Justice for such an investigation, according to Kathleen Taylor, Executive Director.
Read more

Published:
Tuesday, November 2, 2010
Last Monday, just before 9 o'clock at night, a half dozen Seattle police officers in black tactical gear, with guns drawn, broke down the front door of an apartment with a battering ram and put the man they found inside in his bathrobe face down on his kitchen floor at gunpoint. The officers' search revealed two marijuana plants, each roughly 12 inches tall, and a document establishing that the man on the kitchen floor had been authorized by his physician to engage in the medical use of marijuana as provided under Washington state law. Read more
Read more

Why Marijuana Arrests Matter as Much as Use

The Right Way and Wrong Way for Dealing with Prescription Opiates

News Release, Published:
Wednesday, September 8, 2010
In the wake of the tragic shooting of a Native American wood carver, the ACLU-WA told Seattle leaders they must provide leadership in preventing overreactions by police. Among other changes, officers must be trained to understand that “appearing different” doesn’t make someone a threat to public safety.
Read more

Who Moved My Border? Living in the Constitution-Free Zone

Published:
Friday, September 3, 2010
Do you think Arizona, with its “papers please” law, is the only state where law enforcement officials are approaching travelers and asking about their citizenship? Think again. Federal immigration officials are asserting the authority to ask individuals about their citizenship far away from any border crossing or port. And they regularly question people as far as 100 miles away from any border. Nine of the most populous U.S. cities and two-thirds of our nation’s population reside within this “Constitution-free zone.” Read more
Read more

Published:
Tuesday, August 31, 2010
Gangs present a serious public safety challenge to our communities.  But the approach that our state has instinctively turned to in the past—relying on arresting and jailing those believed to be involved in gangs—fails to get to the root causes of the issue, and likely makes it worse.  To be sure, for Washington cities dealing with violent crime, such as those in the Yakima Valley, meeting this challenge means appropriately punishing violent offenders.  But it is equally critical to find avenues through which individuals can leave gangs and reenter the community.  Simply imprisoning gang members and telling them to leave gangs doesn’t work if there’s nothing else for them to do, and no resources to help them get out. Read more
Read more

Published:
Wednesday, July 28, 2010
A feature story in the Washington Post this week highlighted what has become a nationwide problem since 9/11: police and security officers interfering with the rights of people to take photographs. As the Post put it, “Almost nine years after the terrorist attacks, which ratcheted up security at government properties and transportation hubs, anyone photographing federal buildings, bridges, trains or airports runs the risk of being seen as a potential terrorist.” Read more
Read more