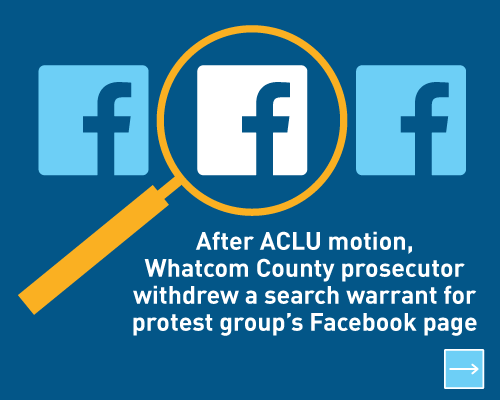 Published:
Friday, December 20, 2013
The ACLU of Washington recently succeeded in advocacy that reaffirmed The Militant’s First Amendment right to inform and share its opinions with incarcerated individuals.
Read more

News Release, Published:
Wednesday, January 9, 2013
January 23 - Update:  The jury today reached a verdict and ruled in favor of the City of Tacoma.  No decision has been made yet as to whether to appeal the case. Suit Says Police Actions Aimed to Prevent Peaceful Protest The ACLU-WA is representing six citizens who are suing over violations of their rights to free speech and assembly by police at anti-war demonstrations at the Port of Tacoma. A jury trial in the case began in federal district court in Tacoma on January 7.
Read more

Veterans For Peace Sues to March in Veterans Day Parade

News Release, Published:
Monday, November 5, 2012
A veterans group which has marched in Auburn’s Veterans Day Parade for the past six years is suing to march in the 2012 parade. The group says that the city of Auburn officials are violating free speech rights by unfairly denying its application to march in the civic celebration.
Read more

Published:
Wednesday, October 3, 2012
A vibrant democratic society prizes freedom of speech. Its government does not try to protect the public from messages that some people find offensive or disturbing. President Obama asserted this principle before the United Nations General Assembly saying, "…in a diverse society, efforts to restrict speech can quickly become a tool to silence critics and oppress minorities.”
Read more

News Release, Published:
Wednesday, October 3, 2012
The U.S. Court of Appeals for the Ninth Circuit heard oral arguments in a lawsuit seeking to uphold the Seattle Middle East Awareness Campaign’s free speech rights on Metro buses. It is when we are faced with speech which is upsetting to some people that support of the First Amendment is most important.
Read more

The Union of Civil Liberties and Labor

Published:
Friday, August 31, 2012
Labor issues were much on the minds of the small group of people who began meeting in Seattle in 1920 to discuss civil liberties violations in Washington state. After all, this was the year after the famous (or infamous, depending on one’s politics) five-day Seattle General Strike, the first general strike by labor unions in an American city.
Read more

News Release, Published:
Wednesday, July 25, 2012
The ACLU-WA is appealing its lawsuit seeking to have Sound Transit run a paid ad by Working Washington touting the importance of good jobs at SeaTac. “ When a public agency operates an advertising program open to a wide variety of messages, individual government officials should not be left to decide subjectively what is ‘controversial.’
Read more

News Release, Published:
Wednesday, June 6, 2012
The ACLU of Washington has decided not to appeal the April 10, 2012 ruling by the U.S. District Court in Spokane against library patrons’ challenge of the Internet filtering policy of a regional library system. While the ACLU supports the American Library Association’s position that public libraries should not filter Internet content for patrons, the current facts in the case do not support an effective appeal.
Read more